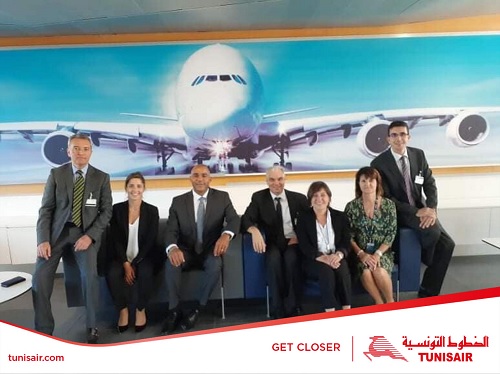 Tunisair announced on September 04, 2019 that it was finalizing the negotiations with Airbus for the Sale and Leaseback of five A320neo aircraft.

Often used in commercial aviation, the leaseback is mainly used to recover the cash invested in the asset.

Companies, for example, sell the aircraft to the lessor, banks or other financial institutions, which in turn lease the assets to the companies.

Tax savings can also be realized by the company as soon as the asset is no longer in their possession but rented.

Because of the importance of the price of an aircraft and engines, especially new aircraft, cash from this type of leaseback is used by companies to improve their financial performance.

Tunisair Deputy General Manager Ali Miaoui, head of the negotiating committee with Airbus, said the company has opted for sale and lease back for strategic reasons; the cost of the operation is estimated at 900 million dinars, the company has paid 200 million dinars and must secure the rest of the amount during the next 2 years; the formula will provide the necessary funding.

“The average life of Tunisair aircraft is estimated at 27 years, the new aircraft will be removed after only 12 years of service, which will reduce maintenance costs and ensure a better quality of service to travelers,” he added.

Ali Miaoui also indicated that the new planes will have a real business class, and that they will be used mainly to Sub-Saharan destinations to meet a demand that continues to grow towards these countries.

“Despite the financial problems of Tunisiair, four leasing companies ranked among the top ten in the world want to join us for this operation … Tunisair has enough notoriety and a respectable history that attracts investment,” he said.

He added that this operation is part of the company’s reorganization program, which is making steady progress.

Ali Miaoui said that the agreement reached 80% progress, and it will be finalized in late October 2019.

The first aircraft will be issued by Airbus in February 2021 and the last in April 2022. Tunisair has acquired three aircraft aged five to six years; they will be delivered in 2020 and will ensure the transitional phase.

Airbus launched in 2010 the NEO (New Engine Option) program, aimed at improving the efficiency of the A320.

New generation engines are being used, either the PurePower PW1100G or the LEAP-1A, the sharklet are retrofit and and equipment modernized.

These aircraft reduce fuel consumption by 15%, equivalent to a distance of 950 km, and operating costs by 14%. They reduce the noise level of the aircraft by 15 dB compared to ICAO Chapter 4.

Saudi Fund grants US$20 million to Niger for Kandadji dam

Cameroon: Oil production set to rise by about one-quarter this year