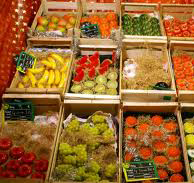 Under this season, official forecasts in Tunisia expect overall exports of summer fruit to reach nearly 41 million tonnes. “The target sought-after is to exceed the volume exported in 2011 so as to reach the record quantities exported in 2010 (45,000 tonnes).

Among the fruits consumed by Tunisians there are watermelon, and stone fruits (peach, nectarines, apricots, plums …). Watermelon exports accounted for 54% of Tunisia’s overall exports of summer fruits and stone fruits followed with 28%, said the Ministry of Agriculture.

Tunisian summer fruits were exported mainly towards the Libyan market, which has received about 13,000 tons alone, i.e. 40% of the total quantities exported, against approximately 7,000 tonnes in the previous season.

Italy, Algeria and France are also among the major destinations of these fruits.

Parallel to this increase, exports of Tunisian summer fruits are faced with the high cost of air and sea transport, in addition to boarding difficulties that “undermine the competitiveness of Tunisian products in terms of prices and preserving quality during the transport operation,” according to the Tunisian Ministry of Agriculture.

Tourist arrivals increase by 1% in Mauritius in 5 months