Tunisia-BCE in Washington: Tunisia designated major non-NATO ally by US 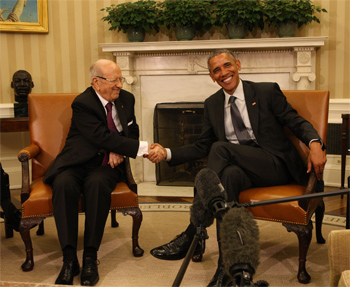 In his first official visit to the United States, the President of the Republic, Beji Caid Essebsi was received, on Thursday at the White House by US President Barack Obama, a meeting that should breathe new vitality to the already ancestral relationships between the US and the birthplace of the Arab Spring and home to the first real democracy in the Middle East and North Africa.

After this meeting, President Obama announced that he intends to designate Tunisia as a major non-NATO ally of the US, highlighting the democratic progress of the country after the Arab Spring uprising.

Obama also said it will be important to try to stabilize Libya so there is not a power vacuum that threatens Tunisia.

Only a limited number of countries have this special status as a non-NATO ally. It enables a country to be eligible for certain privileges in support of cooperation on defense and security but does not provide security commitment to that country.

Speaking after the meeting devoted to the instability in Libya and the region, Obama said the US will provide short-term assistance to Tunisia in order to enable it to complete economic reforms.

The US President outlined what should be the architecture of cooperation between Tunis and Washington by supporting the transition to democracy in Tunisia. In an Opinion Editorial (op-ed) published Thursday by the Washington Post, the two presidents said “the meeting will be an opportunity to mark Tunisia’s s progress and deepen partnership between the two countries” to help Tunisia’s new democracy deliver the greater prosperity and security that its citizens deserve. ”

“Tunisia shows that democracy is not only possible but also necessary in North Africa and the Middle East,” they write.

Tunisia has emerged as the success story of the region, with citizens repeatedly casting their ballots in free and fair elections, and the country crafting a new constitution that upholds religious freedom and guarantees human rights and equality for all people, including women and minorities, say Obama and BCE.

The national unity government includes secularists and Islamists, “proving that democracy and Islam can thrive together,” they write.

Speaking at the US Institute of Peace in front of an audience of academics, thinkers and leaders in the US Government, Beji Caid Essebsi, while admitting that the experience of democratic transition in Tunisia was sown with pitfalls and about falling apart at some point, remains the most successful experience in Arab Spring countries.

This is evidenced by the end of the political polarization that gave rise to the drafting of a pioneer civilian Constitution, transparent parliamentary and presidential elections, the formation of a government representing much of the political class and the appointment of a head of government outside the party that won the elections with the participation of Ennahdha movement.

The President of the Republic has, however, noted that the lack of job opportunities and the development gap between coastal cities and inland regions, main factors that sparked the revolution in 2010, still linger.

“Successive governments have failed to address these issues,” he said, adding that “the decline of the economy in recent years is the result of difficulties inherent to the transition period.”

For now, the visit produced its first tangible effect in the form of the signing of a Memorandum of Understanding on long-term cooperation between Tunisia and the United States, in the presence of Beji Caid Essebsi and US Secretary of State John Kerry.

It provides new mechanisms for a long-term strategic partnership between the two countries governing the economic, educational, cultural, security and defense fields.

“The achievements of the Tunisian revolution and the democratic transition in Tunisia are an unprecedented opportunity to establish a more robust and diversified partnership between Tunisia and the United States,” reads the document.

It also provides for supporting cooperation in the fight against terrorism through financing programs for the purchase of military equipment and organizing military and security training programs.

The document also provides for increased cooperation in higher education and in the scientific and cultural fields and the establishment of a joint economic committee involving the public and private sectors in both countries.

The committee is expected to hold periodic meetings in Tunis and Washington to discuss ways to boost trade bilaterally and promote investment.