HomeFeatured NewsTunisia: Chahed has plenty of work ahead, according to CONECT’s survey
Featured News

Tunisia: Chahed has plenty of work ahead, according to CONECT’s survey 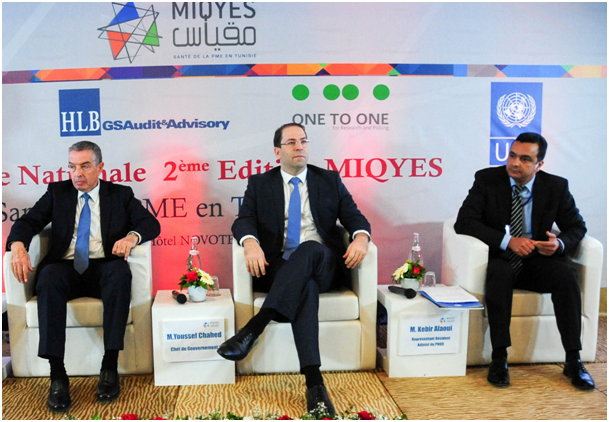 According to the results of a survey conducted in 2017 by the Confederation of Tunisian Citizen Enterprises (CONECT), in partnership with the One To One Foundation and presented Thursday, March 15, 2018 in Tunis, in the presence of Prime Minister Youssef Chahed and several senior officials, 30% of small and medium-sized enterprises are threatened with bankruptcy because they could not achieve a net profit, while 35.6% of SMEs did not recruit in 2017 for inadequate profiles.

Regarding the business environment, 59.1% of SMEs were threatened by informal competition; specifically 65.9% of them are based in the governorate of Sfax, of which 63.2% operating in the industrial sector.

The same survey showed that 45% of SMEs still suffer from the impact of the situation in Libya.

On the other hand, 39.3% of respondents said that their turnover has increased compared to 2016.

For the management of industrial SMEs, 60% of business leaders manage themselves the commercial function and 22.7% manage finances in 2017.

The survey also showed that 45% of these enterprises cannot work without paying bribes. 50.3% of business managers do not think they can work and earn without resorting to corruption.

Similarly, 33.7% of companies resort to management loans and 38.8% have applied for credit in 2017; note that 33.5 entrepreneurs spend more than one hour per week with the banker.

According to the same survey, 54.9% of SMEs carried out a staff evaluation by superiors in individual meetings, representing an average evaluation rate of 7.6%.

In addition, employee health problems and public transport are the main causes of absenteeism in SMEs (58.6% and 29%).

Regarding administrative procedures, 27.6% of the companies surveyed suffer from blockages with the tax administration and 21.4% with the customs.

The survey also found that 65.3% of entrepreneurs, mainly exporters, are optimistic about the future of their businesses.

“MIQYES” is a barometer of the health of SMEs in Tunisia based on a survey of a sample of 500 SMEs from Tunisia’s 24 governorates and operating in various sectors, including industry, services, trade and agriculture.

The survey focuses on the health of these SMEs with a focus on access to finance, human capital, market access and the business climate in general.

The survey targeted the top managers and general managers of active companies.

It was articulated around a certain number of axes, notably the evolution of the situation within the SMEs in relation with the productivity, the creation of jobs, the management of the human resources, the profits realized, the access to international markets, declining yields and the impact of the environment, investment and business.

It has also identified the difficulties that SMEs face in their relations with the administration, particularly the customs services, the tax administration and the banking system…

Tunisia-Business Intelligence: Our administrations are highly compartmentalized and continue to...