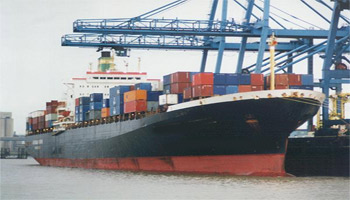 The balance of the external sector has been strongly affected since 2011 by the continued slippage of the trade deficit, which reached a record level of 15.6 billion dinars or 16% of GDP in 2017.

All product groups recorded a deficit during 2017. Hence, there was a sharp deterioration of the energy balance, which resulted in a deficit of 4 billion dinars in relation to the 39.9% increase in imports (compared to -19.2% in 2016).

The deficit of the food balance remained at a high level (-1,355 MD). Finally, there was a deterioration of the balance of consumer goods with a deficit of 986 MD in 2017. 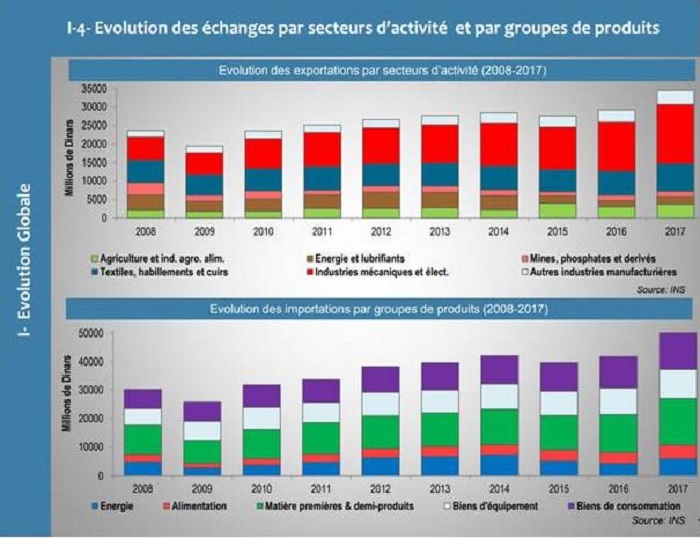 This, in connection with the high level of imports which have been on an upward trend in recent years, reaching 12.8 billion dinars in 2017.

As we can see, in this INS paper, the mechanical and electrical industries have saved the export.

But it is also the consumer goods (purple color), 2nd largest import after the essential raw materials and semi-products that have always negatively impacted the trade balance.

The BCT concluded, in its latest analysis of foreign trade for the 2017 fiscal year, that “in a context marked by sluggish growth, the chronic deterioration in the trade balance could have a considerable impact on the sustainability of the country’s external debt.

Clear exchange effect on import more than on export

At the end of 2017, the trade deficit of resident companies (from the exchange perspective) widened by 4.3 billion dinars compared to 2016 to 22.5 billion dinars. This situation significantly impacted the level of foreign currency reserves and consequently exerted strong pressure on the dinar exchange rate.

As we see elsewhere, in this document of the BCT, the exchange effect had little impact on the export, strongly impacted the import and was behind almost 50% of the negative result of 2.991 billion DT of the balance.

Experts of the BCT now consider “necessary a profound revision of the economic model, in order to remedy the structural impediments that hinder the revival of export-producing sectors that provide foreign exchange and high added value”.

A billion TND lost, in currency, because of phosphate

2017 is also the activity of the mining, phosphates and derivatives sector which has declined considerably since 2011, resulting in a fall of exports volume by around 50% between 2010 and 2017.

This decrease is in relation with the continuing social tensions at the production and transportation sites, a huge loss in foreign exchange of almost $ 1 billion ($ 584 million in 2017 against $ 1,507 million in 2010).

“This, according to the BCT, favors a durable solution to avoid any disruption affecting such a strategic activity for the Tunisian economy.”

The energy deficit, which amounted to 4 billion dinars, contributed in 2017 for nearly 45% in the widening of the overall trade deficit.

The continuous decline in the production of hydrocarbons was in fact combined with the increase in the prices of these products (+ 23.6% compared to 2016).

The expected surge in petroleum product prices in 2018 is expected to accentuate this energy gap.

This, according to the BCT, would eventually require a systematic recourse to external indebtedness.

But also the implementation of an effective strategy for the control of energy consumption, while moving towards renewable energies (solar, wind …) should become a national priority.