Tunisia – Corruption in Tunisian administration: unions in the dock! 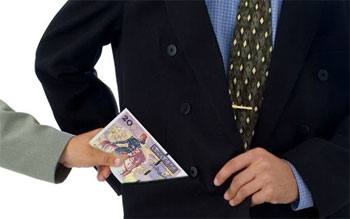 The president of the Tunisian Association against Corruption Ibrahim Missaoui said in an interview with Africanmanager on Thursday, August 6, the scourge of corruption persists in different forms in Tunisian firms, accusing some officials in public administrative services of concluding agreements with trade unions to serve their personal interests and escape justice.

Ibrahim Missaoui also said many public companies have turned into family businesses where the mother, father and children work in the same branch of activity, which means, he believes, that public service staffing competitions are no longer subject to the criteria of competence or grade level, but to personal interest.

He also specified that the phenomenon of succession in public service has continued to spread in the Tunisian government, accusing the unions of abusing recruitment competitions in the public service through their intervention in hiring operations.

The president of the association against corruption has further indicated that corruption has affected all sectors and branches of activity, saying the association has received during the last period several complaints related to some public companies like public health institutions and the National Office of Family and Population (ONFP). The energy and transport sector as well as procurement markets were most affected by corruption, according to him.

On another hand, Ibrahim Missaoui has indicated that administrative cars still represent a heavy burden for Tunisian enterprises, adding that the decision to reduce the number of company cars has not occurred despite the commitment of the government since last year to do so.

“85% of Tunisians do not trust administration officials”

Furthermore, Missaoui said that governments that succeeded after the Revolution did not take the right decisions and all measures able of eradicating the scourge of corruption from its roots: “all governments have not made efforts to break with corruption, embezzlement and abuse of public resources, “he said.

He has, in this context, noted that the association against corruption has recently conducted a survey which showed that 85% of Tunisians do not trust the administrative officials.

Ibrahim Missaoui was not the first to warn against the spread or the increase of corruption in the Tunisian companies and administrations after the Revolution.

At a recent meeting held in Tunis at the initiative of the Prime Ministry, in collaboration with UNDP, President of the National Authority against Corruption Samir Annabi confirmed this upward trend, noting that 50 % of Tunisian officials are in a situation of conflict of interest.

Several other officials have warned against non-declaration of financing sources by several political parties and associations. The president of the Committee of Administrative Reform, Good Governance and Fight against Corruption at the House of People’s Representatives (ARP), Sofiene Toubel announced at a recent meeting in Tunis that only 20% of MPs have declared their assets, while the rest have not yet done it.

“The Revolution has not put an end to corruption”

A World Bank report made public last June also confirms the persistence of the phenomenon of corruption in Tunisia. “The Revolution has not put an end to corruption and customs fraud in Tunisia has been increasing,” reads the report.

It also emerges from the report that customs fraud has increased after the Revolution for all companies as a whole. This increase is estimated by the WB to 5%.

According to the report of the World Bank, customs fraud in Tunisia resulted in considerable tax losses but also brought great inequality insofar as entrepreneurs linked to political power, who were wealthy, seem to have been particularly prone to benefit of customs fraud.

Tunisia: the public sector is recruiting at all costs!