HomeNewsTunisia: Electoral Law should be passed before the end of March
News

Tunisia: Electoral Law should be passed before the end of March 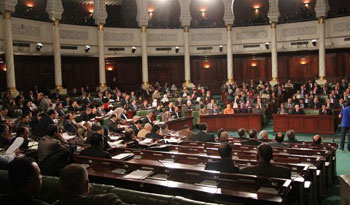 The electoral law is due to be passed by the end of March at the latest, heads of parliamentary groups at the National Constituent Assembly (NCA) agreed on Monday.

They stressed at a meeting the need to provide all guarantees to ensure the running of the next elections in the best conditions.

The meeting of the parliamentary groups focused on setting the priorities of the assembly’s action for the coming period, President of the National Constituent Assembly (NCA) Mustapha Ben Jaafar told the press. Participants decided to hold this meeting once a month for consultation. The meeting was an opportunity to discuss the provisional authority to review the constitutionality of laws which, he said, will be established before the adoption of the electoral law.

The torture prevention authority was also on the agenda of the meeting. Ben Jaafar called on the rights and freedoms commission to expedite the discussion of the bill on this structure.

The heads of parliamentary groups decided to devote two days per week to define priority bills, said the NCA president.

”Recovery of tourism activity could only be gradual ”, says Director...

Tunisia: Tunisair to operate two flights to Constantine and Conakry from...