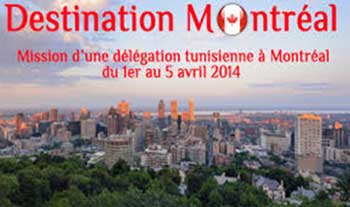 The Canadian market shows strong potential for the tourist destination of Tunisia. According to Tunisian tourism professionals, Canadian tourists, who prefer to travel in winter, represent a very interesting opportunity to fight against the seasonality of Tunisian tourism.

It is in this context that various stakeholders in tourism have repeatedly launched campaigns to promote the Tunisian tourist destination in Canada to attract tourists to flock this summer season 2014.

According to the Ministry of Tourism, alongside the food exhibition “SIAL 2014” to be held from April 1 to 5, an evening dedicated to the Tunisian Tourism will be organized on April 4 in Montreal.

More than 200 guests among representatives of local key tour operators, Tunisian and Canadian businessmen, journalists and opinion leaders will take part in this event designed around the modernism and authenticity of the country.

The program includes a tasting of local products , musical entertainment performed by the jazz trio led by Mustapha Mami and a fashion show combining traditional Tunisian costumes by designer Nizar Chargui and those more modern from Quebec by Yves jean Lasse.

The Promotional program of the Tunisia destination also includes several press trips, Eductours and participation in a dozen shows throughout the year including the most essential shows such as “Toronto ‘s Ultimate Travel Show, ‘ the” Travel and Vacation Show “in Ottawa , the” International Tourism and Travel Show” in Montreal …, said the same source.

The annual conference of travel agents of Quebec in September Tozeur

During the month of Septembre2014, the Tunisian tourism is organizing in Tozeur the National Congress of members of the Travel Agents Association in Quebec. Press trips will also be organized on the topic of medical tourism. Moreover, Tunisia will participate in 5 specialized medical shows in Canada, while the Tunisian National Tourist Office (ONTT) Canada will participate in a great evening organized next May 14 by the Radio 103.3 FM in the prestigious Golf Club “Les Cerfs de Longueuil” to be attended by 150 VIPs of the Canadian business circle, political sphere. Three programs on Tunisia of half an hour each will be aired as part of a TV show hosted by sports commentator and journalist Daniel Meloncon on TVA Channel, one of the two most watched TV channels and with the highest viewership rates in Canada. The program will be an opportunity to promote golf and thalassotherapy products in the Canadian market.

It is provided by 24 tour operators including 16 marketing the destination for the Francophone part of the country and 8 for the Anglophone part. The total number of Canadian travelling abroad is estimated at more than 16 million passengers (12 million to the United States of America, 4 million to Europe and 1 million to Asia and Africa). Tunisia is perceived as an exotic and Mediterranean country, where security prevails and with a potential especially in terms of cultural tourism, health tourism and long stays (15 days to 3 months).

Tunisia: New measures in favour of consumers are underway