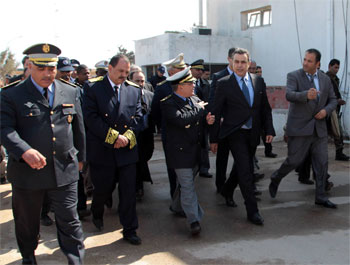 Interim Prime Minister Mehdi Jomaa paid a field visit to Medenine on Sunday. He was accompanied by Minister of National Defence Ghazi Jeribi, Minister of Economy and Finance, Hakim Ben Hammouda, Minister Delegate in charge of Security, Ridha Sfar, Minister in charge of Co-ordination and Monitoring of Economic Affairs Nidhal Ouerfelli and Commander of the National Guard Mounir Ksiksi.

The Prime Minister learnt about workflow at the border point coming under the National Guard in Ben Guerdane and the equipment, work mechanisms, level of co-ordination and operational capacity.

A presentation on efforts made to stabilise the security situation on the border and combat smuggling was made by security officers.

Jomaa also paid an inspection visit to the border crossing of Ras Jedir where he learnt about the progress of development works there, the equipment available and workflow.

He called, in this regard, to speed up works and set a precise timetable for them (date, cost).

Minister Delegate in charge of Security highlighted, on this part, the importance of the border crossing of Ras Jedir at the economic level and in terms of border development and security.

He said “the government has a security strategy based on an comprehensive approach to guarantee security at the Tunisian-Libya border crossing and promote local development in order to ensure stability and economic revival regionally and nationally.”

He added that traffic on the border crossing of Ras Jedir on the Tunisian side is normal in both directions “but the problem is posed on the Libyan side.”

“Tunisia does understand the temporary situation underwent by Libya and seeks to ensure the resumption of normal traffic in the border crossing as part of Tunisian-Libyan co-ordination and co-operation,” he said, calling on Tunisians and Libyans to show patience until “the issue is resolved in the interest of all.”

Jomaa also discussed with local businessmen problems impeding the realisation of some projects and ways to resolve them as he visited the Institute of Arid Regions (IRA) in Medenine.

The Prime Minister announced in a statement to the press the formation of a task team composed of representatives of the Prime Ministry and the concerned ministries.