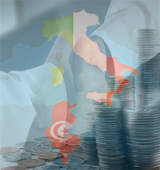 In the hierarchy of European economic partners of Tunisia, Idalie ranks among top ones and often holds the  first rank. Whether it’s industry, investment, energy, technical and technological partnership or to a lesser extent, it is true, tourism, Tunisia’s closest  European neighbour  is not to give up strengthening its partnership with Tunisia even if it is facing the cumbersome hardships of the international economic crisis.
The most recent forum organized by the APREIME, the Agency of Tunisian-Italian cooperation on the theme “Italy-Tunisia: a platform for the Euro Med” with the fortnightly magazine “The Economist Maghreb” has provided an undisputed evidence in this respect.
Its aim was not to convince Italian industrialists and investors to come in Tunisia, which was clearly self-evident, but mainly to explain the ingredients of the renewed potential of Tunisia as an outstanding  investment site that could be used  to further gain  other markets, namely those of North Africa and various Arab countries.

It must be noted that the quality of Italian panel gave a special feature  to this  meeting,since speakers  included the Italian Ambassador in Tunisia, Mm. Carlo Giovanardi, Minister Counsellor to Italian  Council of Ministers Riccardo Pedrizzi, senator and chairman of the Tunisian-Italian parliamentary friendship Association and Pier Luigi Polverari, president of the APREIME.

Alternately, they  emphasized the high-potential investment opportunities in agriculture, food, energy, crafts as well as cooperation and exchange at the university level.
Actually, the volume of exchanges between the two countries reached, in 2008, 5.6 billion euros, i.e. 10.08 billion dinars, including 4.86 billion dinars exports and 5.22 billion dinars imports. In his address to the forum, secretary of state in charge of fisheries Abderrazek Daaloul pointed out that 21 Tunisian- Italian joint ventures operate in the fisheries and agriculture field, with a total investment estimated at 59 million dinars.

For his part, secretary of state in charge of renewable energy and food industries Abdelaziz Rassaa said that Tunisia is today the first South-Mediterranean industrial exporting country to Europe with 6.7 billion euros in 2007, highlighting the main projects of Tunisian-Italian co-operation in the energy field, such as the ELMED project which consists in the construction of a 1200-MW power station and the inter- connection of the two countries’ networks. Taking the floor, minister adviser to the Italian Prime Minister Carlo Giovanardi described the relations binding the two countries as exemplary.

Besides, president of the Italian-Mediterranean Co- operation Agency (APREIM) Pier Luigi Polverari pointed out the multiple opportunities provided in matters of co-operation in the sectors of food-processing industry, handicrafts and university co-operation.