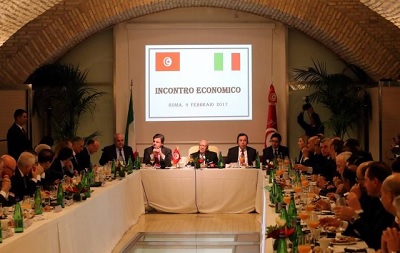 Tunisia and Italy signed a set of tourism, energy, training, international transport and development agreements at a ceremony held Thursday in Rome under the chairmanship of President Béji Caïd Essebsi.

The accords are as follows:

– A memorandum of understanding on tourism cooperation inked by Tourism and Handicrafts Minister Salma Elloumi and Italian Undersecretary of State for Cultural Heritage and Tourism Dorina Bianchi.

Jhinaoui and his Italian opposite number Angelino Alfano also signed the following memoranda and agreements: – A memorandum of understanding on development cooperation for the period 2017-2020 which provides for 165.5 million euros in funding (100 mln euros in loans and 65.5 mnl euros as a donation). The agreement seeks to give a boost to the private sector as well as regional and local development and upgrade infrastructure in education institutions.

– An executive program of a cooperation agreement in culture, education and training for the 2017-2019 period.

– Action plan on health and medical sciences for the period between 2017 and 2019.

Jhinaoui told the media after the signing ceremony these agreements crown the state visit of the first post-Revolution elected president to Italy.

These accords took centre stage at the working visit which Italy’s Alfano paid last January to Tunisia and reflect the importance of Italy’s participation in the International Conference on Investment Tunisia 2020, the FM underscored.

The Declaration of Principle signed Thursday is part of efforts meant to bolster relations in a wide array of fields and underpins Italy’s position as Tunisia’s second trading and economic partner. Bilateral relations will now see a qualitative leap, the Foreign Minister said.

Italy’s FM commended bilateral relations and the privileged partnership and reiterated his country’s commitment to help Tunisia by means of providing necessary funding for projects and establishing a fruitful cooperation.

He also said joint efforts to protect maritime borders in a bid to tackle illegal immigration bore their fruits.

A roadmap that covers such areas as political issues, cooperation, migration, investment and youths was laid out in a joint declaration signed by the two countries’ FMs, Tunisia’s Ambassador to Italy Moez Sinaoui told TAP correspondent.

Abdellatif Mekki: I recommend organization of societal dialogue to agree on...