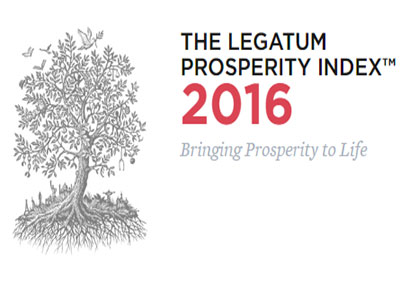 Tunisia was ranked 93th among the most prosperous countries in the world in 2016, according to the report prepared by “Legatum Prosperity Index,” published Thursday, November 3 by the Dubai-based investment company and think tank Legatum Institute.

At the top of the ranking, New Zealand, Finland and Norway are the three most prosperous countries in the world.

In this ranking, Tunisia came ahead of Morocco (101th in the world) and Algeria (111th), which is ranked third more prosperous Maghreb and North African country, ahead of Libya and Egypt.

As for Tunisia, the country has lost one place from the 2015 ranking due primarily to the deterioration of economic indicators and political and social instability.

At the Arab level, Tunisia was ranked sixth. It lags behind the UAE listed in the first position in the Arab world by ranking 41st, Qatar 46th, Bahrain 67th and Oman and Kuwait 70th and 71st, respectively.

At the top of the ranking, there are mainly Western European countries, the first place, however, being occupied by New Zealand, followed by Norway and Finland. The UK is 10th, France 18th and the US 17th.

At the bottom of the ranking are mainly African countries and conflict-affected countries in the Middle East, including Nigeria, Libya, Iraq, Sudan, Central African Republic, Afghanistan and Yemen.

The Legatum Institute ranks 149 countries in this Prosperity Index based on more than 90 criteria.

The Prosperity Index is designed to evaluate the national success and prosperity in terms not only of material wealth but also future prospects.

Tunis: Nidaa Tounes promises a dignified life for all