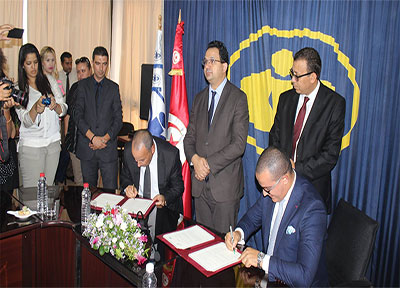 Entrepreneurs are still struggling to access traditional financing, hence the need for a form of alternative financing.

On this basis, the Agency for the Promotion of Industry and Innovation (APII) has chosen private partnership to meet this challenge and subsequently contribute to reducing unemployment by creating new jobs.

In this regard, a partnership agreement was signed on Thursday, September 22 by APII and micro-finance institution “Zitouna Tamkeen.”

“This new partnership essentially aims to diversify the sources of funding for young entrepreneurs, while helping them to better contribute to economic recovery,” said Samir Bechouel, Director General of APII at a ceremony organized on the occasion.

This synergy between the two organizations will also help ensure better guidance to young investors, particularly in the project post-establishment phase, according to the official.

This is important since many officials have pointed to the high mortality rate of newly created companies, despite the existence of multiple structures and support mechanisms.

This rate is estimated at 80%, according to the latest figures released by the APII through the voice of its Director General Samir Bechouel.

For the APII Chief Officer, most businesses that fail are victims of two main factors that hinder their survival in Tunisia and are pinpointed by all stakeholders, including developers and professional bodies concerned, and affect all the stages through which goes an investor. They are funding problems, including of innovative projects and lack of support.

Comparatively and specifically in South Africa, for example, studies have shown that a dollar invested in business incubation generates $ 5 tax. Also in this country, 80% of companies that followed a process of incubation survive their third year, against 20% that do not follow the process.

For Zitouna Tamkeen, this work is part of a comprehensive approach combining development and entrepreneurship promotion.

“This work is a response to all current challenges in Tunisia,” representative of that institution Nabil Abdelghani said for his part, emphasizing that this is another example of the solidarity and social economy. That economy seeks to meet the needs of a class of the population, often disadvantaged and marginalized.

“Through this investment bank for the poor, we would like to solve the problem of access to finance, but also monitor the creation of new projects,” he said.

Also according to the official, 250 companies are affected by this agreement that will last one year renewable with a 20-thousand-dinar ceiling per project in 2016 and 300 in 2017.

On the government side, assistance to young businesses is a proven method to increase the survival rate of Tunisian companies.

As such, Minister of Industry and Trade, Zied Laadhari placed emphasis on this kind of partnership between APII and Zitouna Tamkeen, to encourage young entrepreneurs.

“This approach does not only concern the granting of credit, but also the guarantee of a proper support for better sustainability of our industrial fabric already made up 98% of SMEs,” he said.

For the minister, this is an important step since entrepreneurship should be a voluntary and declaratory act in a market where self-regulation is made only by competition, away from administrative control and prior authorizations.