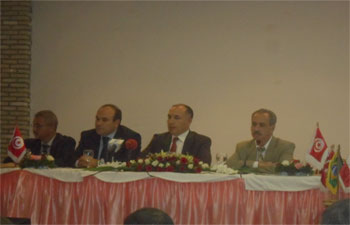 Over 26 ambassadors and charges de mission accredited in Tunisia are currently on a tour in southern Tunisia, at the initiative of the Ministry of Tourism on the celebration of World Tourism Day.

The tour, which was attended by the Minister of Tourism, Jamel Gamra also brought together a large number of Tunisian and foreign journalists coming mainly from Europe.

This tour is part of the promotion of the tourism sector in general and the consolidation of the Sahara in particular.

Despite the massive presence of several key players, we noted the absence of the ambassador of one of the strategic providers of tourists, namely France. AfricanManager questioned the reason for the absence, but the Ministry of Tourism has no answer.

Our message is clear

Jamel Gamra Tourism Minister said the tour comes at a strategic moment in which the country is seeking to promote the regions of the South, particularly Tozeur. “Today, these regions need this kind of campaign to highlight their specific benefits for tourists.” He added: “The strategy is clear. Product diversification remains a prerequisite to bring tourism to a higher level. Moreover, a specific plan has been put in place to achieve this ambitious goal.

‘No plan to raise fuel prices in Nigeria’