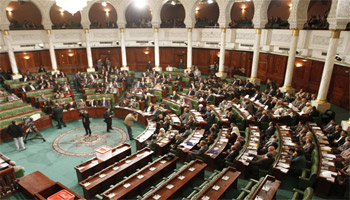 The National Constituent Assembly (NCA), a recurrent source of controversy, has just created one too many. MP Ali Bechrifa criticized the attitude of his colleagues, who had rejected, Monday, June 16, at a plenary session held in camera, the request to waive the immunity of six Deputies.

These MPs are Tahar Hmila, Amor Chetoui, Lotfi Ben Mosbah, Samir Ettaïeb, Ibrahim Gassas and Hichem Hosni. The position of Ali Bechrifa has all the hints and the contours of a cry against what may appear as a slip on the part of the Commission on the Rules of Procedure and Immunity and the plenary of the NCA which have wielded a veto, since October 2011, and with few exceptions, over any request to waiver the immunity of any MP.

Ali Bechrifa said in a statement that politicians stand in solidarity with each others and systematically reject any request for waiver of immunity, and it is now useless to waste time in plenary sessions for this purpose.

Indeed, the waiver of immunity of an MP is engaged on request of the prosecution, in order to enable the court to examine the case involving the member in question, and therefore, the judicial procedure that is reasoned and legally justified is purely technical and has no political character.

The positive response from the NCA and the Commission on Rules of Procedure and Immunity to the request shows the endorsement of members of the Constituent Assembly of the separation and independence of the three powers (legislative, judicial and executive) which is the basis of any democratic approach, proves the mutual trust between the legislative and judicial powers, and reveals that deputies are subject to legal proceedings as citizens like any others, litigants and accountable, and benefit in this capacity of the presumption of innocence until the end of legal proceedings.

In fact, the NCA has rejected, since its establishment, all requests for waiver of the immunity. And we must seek the explanation of this systematic refusal in the misconception of the status of the Constituent Assembly, which considers itself the sole source of legitimacy in Tunisia, having in front of it a multitude of provisional institutions, created to handle everyday business of a given sector or body.

But democracy, which is essentially a balance between institutions and powers, requires stakeholders to respect this balance in both theory and practice and recommends taking into account the views of all parties irrespective of their degree of representativeness.

To this erroneous conception of democracy adds a faulty vision of legitimacy, developed and promoted by Islamists who have been based, in their approach, on an assumption, indicating that the country has slipped since Independence, in a false trail that led to Westernization and the Francophonie and the October 23, 2011 elections had set things straight and put the party that represents the country’s identity back in the saddle.

And these representations are mixed with heavy atmosphere and excessive polarization that began to settle in the Assembly in March 2012 and the politicization of all requests made by Courts regarding members close to Ennahdha to justify attitudes that are not free from arrogance on the part of the majority which has been entrusted with a historic mission to bring order in the country, and do not want to be heckled by procedures that are likely to disrupt this mission.

The example of Samia Abbou is very convincing in this context. She attacked Beji Caid Essebsi in full session and accused him of being behind the assassination of Chokri Belaid, on February 6, 2013.

Beji Caid Essebsi filed a complaint against the Deputy for defamation, but the request for waiver of the immunity of MP Samia Abbou, discussed on Monday, April 15, 2013, was rejected by the Commission on Rules of Procedure and Immunity under the NCA. And members cited the political nature of the case stating that there was no offense liable to prosecution, to justify their refusal.

But this negative attitude has opened the door to other rejections which are equally unjustified, but as new elections are approaching, everything indicates that the esprit de corps can not be maintained beyond the controversial mandate that expires in months.

Supposedly custodian of consciousness and national representation, the Assembly, which is also the founder of the rule of law that all Tunisians are calling for, would be wiser to put its actions in accordance with the values which it says it embodies, by drawing a clear line between legislative work and partisan and not to say corporatist spirit.

Tunisia: Chinook Energy disposes of all its assets

Tunisia: State increases own revenue by 17% at end August to...