HomeFeatured NewsTunisia: Saïed gets his lowest score ever. Will he learn from it?
Featured News 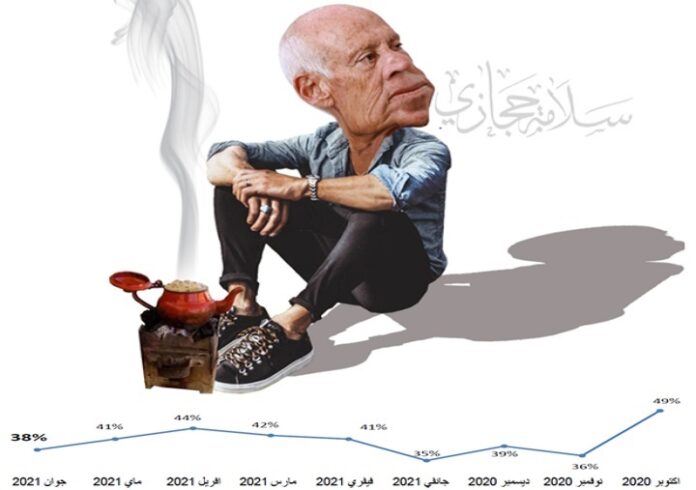 The Emrhod Consulting firm has just delivered its political barometer for the month of June. Conducted between June 25 and 29, 2021, it sees the Head of State record his worst score, his satisfaction rate among Tunisians the lowest of the year 2021, and the second fall in his popularity since he took office. That barometer could be explained as the 2nd serious alert, for a political figure who believes a lot in the popular sanction and who had long boasted of having been elected by more than three million Tunisians.

A year after his election as head of state, the polls rewarded him with a satisfaction rate of Tunisians of 49%. His grace period in some way, will not have lasted longer, and he will continue since then, to tumble. November 2020, he was already suffering its 1st big fall to 36% satisfaction rate. Nabil Belaam already considered this “surprising”. It is true that this rate was 65% in June 2020, and 58% in September 2020, after having ended the year 2019 at 56% satisfaction rate. Between December 2019, that is, two months after he enters the presidential palace of Carthage and the month of June 2021, the popularity (expressed in satisfaction rate of his performance) has lost 18 points.

– His populism already caused his loss!

This loss is not necessarily explained by a well determined fact, but in truth, by a set of behaviors and a general way of governing. In 1 year and a little more than 8 months of presidency, the current Tunisian head of state has never tried to explain his real program to get out of the political and economic crises that shook the country since the end of the reign of the Troika (Ennahdha, CPR and Ettakatol), to get bogged down then in a cold war with Ennahdha. A war with the Tunisian Islamist party, and by proxy against Prime Minister Hichem Mechichi whom he himself appointed for this position. A war punctuated by indirect announcements of assassination attempts against his person, classified without follow-up after some judicial investigations. A war with his prime minister, which will culminate later in the refusal of a cabinet reshuffle, for suspicions weighing on some new ministers never clearly named. And behind this refusal, it is an intentional war and constitutional powers between the Head of State and the Prime Minister.

All this, always wrapped in a discourse of conspiracy about which he would know everything in detail but says nothing, who promises to retaliate against his detractors with a battery of missiles that he will never reveal, and constitutional and legal initiatives, to get the country out of the crisis, and that he will never take.

A populism, in short, which earns him points in the polls, leading to a slow but sure descent, in the esteem of Tunisians and which is reflected in the polls on satisfaction rates.

Those polls will soon be attacked by his supporters, who have been pushing for months the “Protector of the Constitution” to go beyond for a change of regime, and a popular referendum, yet locked by the constitution it is supposed to protect.

Would Saïed be a Marzouki in the making?

In January 2012 according to 3C Etudes, 66% of Tunisians trusted former president Moncef Marzouki. In April 2017, Emrhod Consulting indicated that Moncef Marzouki would only win 12% of the vote and will be rejected from the 2014 presidential elections where he only collected 1.3 million votes.

For now, Kais Saied who enjoyed last June 44% of voting intentions (against 45% in May 2021) according to Emrhod, is far. The same political barometer for June 2021 announced however an abstention rate of 54%.

Has the current Tunisian head of state taken note of the new satisfaction rate of his 20 months in power? Has he made an objective reading, far from any adviser? If so, will he draw the lessons that would save what remains of his term and avoid the fate of Moncef Marzouki, whose true face the Tunisians had finally discovered?

Tunisia: SOMOCER increases its revenues by 12% at end September