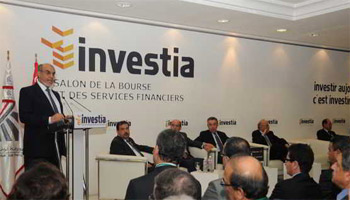 “Large enterprises should apply for listing on the stock market for funding needs,” said Hamadi Jebali, Interim Prime Minister at a conference held on the sidelines of the Tunis Stock Exchange exhibition “Investia 2012” which began Thursday, November 1 at the Convention Center in Tunis.

He assured that his Government will ensure that several companies operating in competitive sectors go public to finance their investments. The goal, he says, is to reduce the burden on the state budget.

Jebali also called, on the same occasion, to further disseminate the stock culture market among Tunisians, spread financial market mechanisms and direct them towards financing of investments in the service of the country’s growth. He also called for improving financial market products, showing more transparency and winning the confidence of local and foreign investors.

Hamadi Jebali also spoke of the poor capacity of the stock market to finance the private and public sectors, which funding did not exceed 11%. He noted that the number of IPOs on the alternative market is small, not exceeding 4 companies now. However, despite this conclusion considered negative, Hamadi Jebali did not hesitate to express his optimism about the future of the Tunis Stock Exchange and its ability to evolve and expand its activities.

Speaking of investment, the prime minister said it is the driving engine to boost development, contribute to the growth of GDP and reduce unemployment. He also called for conducting a full audit in all public banks and strengthening the powers of the banking sector and the public credit.

For his part, Chedli Ayari, Governor of the Central Bank of Tunisia said the financial market, as a whole, is a vector of choice for mobilizing long-term savings which any economy should encourage to ensure a healthy and sustainable funding of its development. Indeed, he notes, the businesses funding mode is still dominated by bank loans (or leasing) highly provided by volatile resources dependent on the availability of real guarantees. This situation has certainly exacerbated the fragility of businesses and hindered at the same time the much desired development of the financial market.

The Governor of the BCT also noted that the contribution of financial markets to funding private investment remains very poor in comparison with similar markets. In addition, fundraising on the market remained confined mainly to financial institutions including the bond section. The share of market capitalization in GDP (23%) remained low.

Chedli Ayari also indicated that despite various incentives to the IPO, the market remains shallow, poorly diversified and unrepresentative of the Tunisian economic fabric. The number of listed companies is currently only 59 companies against 42 units in 2000. Similarly, the alternative market, which is supposed to encourage IPO at less restrictive conditions, currently has only four companies. In addition, business groups are virtually absent on the stock market.

On the characteristics of the securities issued in the market, the Governor of the Central Bank announced that Tunisian businesses have not shown ingenuity or innovation in the diversification of the offer which remained basic and centered on conventional products.

For his part, President of the Board of Directors of the Tunis Stock Exchange, Fadhel Abdelkefi recommended raising awareness of the benefits of the stock market so that companies can recapitalize via the capital market. He also called for disseminating equity culture among students and business communities. Indeed, the Tunis Stock Exchange contributes 5% to the financing of the Tunisian economy. Thus, market capitalization does not exceed 24% of GDP due to the low participation of the Stock Exchange in the economic activity of the country. However, in neighboring countries, this rate is approximately 40%.

Despite these shortcomings, Fadhel Abdelkefi said he is confident about the capabilities of the Tunisia Stock Exchange to evolve. Indeed, the stock market is ready to fund all companies, but this depends, according to him, to the political, administrative and fiscal capacity of the Exchange to demonstrate effectiveness. “You need a Stock Exchange that stands as a showcase of the national economy and close to the country’s GDP. We expect 300 companies to go public,” he added.

With regard to the first edition of the Stock Exchange and Financial Services show “Investia 2012,” forty companies, including Tuninvest, Arab Financial Consultants, Attijari intermediation or Axis Capital chose to showcase their products.

Danida launches a new 5 year recovery and development programme in...