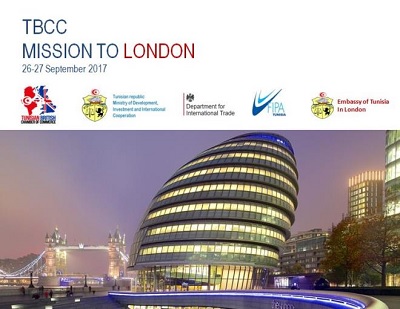 The TBCC will organize a business mission in London on September 26 and 27, 2017, with the participation of more than 12 companies, according to a statement issued by the TBCC on Sunday.

This mission, organized at the invitation of the Lord Mayor of the City of London, Andrew Parmley, will be headed by the President of the TBCC.

The companies concerned are operating in sectors of interest to the British, such as the financial sector, renewable energies, agri-food, education, automotive, tourism and information technology.

This mission, prepared in coordination with the British Government (the Foreign and Commonwealth Office) and the Tunisian Government (Ministry of Foreign Affairs and Ministry of Investment and International Cooperation), aims to promote Tunisia’s attractiveness for trade and investment, but also to explore and encourage new opportunities for partnership with the UK.

A Tunisian-British Business Forum will be organized on this occasion at the British Ministry of Foreign Affairs.

The program will also include the organization of a roundtable discussion with representatives of the London financial center organized by the Mayor of the City of London at Mansion House.

These two events will be the opportunity to address all the topics of reflection on the development of the Tunisian-British business and economic environment, capitalizing on the renewed interest of the British government with many official visits to Tunisia these twelve last months, as well as on the lifting of the travel restriction on Tunisia and the Brexit, reads the statement.

Tunisia: 4 new industrial zones to be completed in June 2015