HomeFeatured NewsTunisia: the strong message of Ennahdha to its opponents!
Featured News

Tunisia: the strong message of Ennahdha to its opponents! 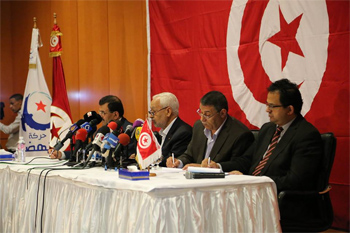 The complete preliminary results of the parliamentary elections were announced on Thursday, October 30 by the Independent High Authority for the Elections (ISIE) after three days of counting. Fact: 85 seats for Nidaa Tounes against 69 seats for Ennahdha, leader of the former Troika which led the country during the years of the post-revolutionary phase.

These results have not had a shocking effect on Nahdhaouis (members of Ennahdha) who were more optimistic about the choice made by Tunisian electors who voted with transparency and put an end to all controversies.

“The results are positive given that our movement has managed to protect the freedom of citizens and preserved public institutions,” party leader, Rached Ghannouchi said on Thursday, October 30.

Speaking before an audience of journalists, he said that efforts will continue in order to serve the revolution and contribute to the success of the third phase of the transition.” This is all the more important that there will never be a return to the regime of dictatorship and no more room for the hegemony of a single party,” Ghannouchi said, adding that “our country moves towards democracy.”

The message of Ennahdha is clear for those wanting to exercise a stranglehold on a power it wants consensual to achieve the goals set. “No other choice is possible, as Tunisia needs a participatory power and balance of the political scene,” Ghannouchi said, while stressing the delicate nature of the situation in a country in the final phase of transition.

To do this, Ghannouchi said his movement is open to all options and all forces to accomplish this mission. He, however, cautioned against threats to freedom, democracy and human rights.

“Tunisia is a centrist country; we are at the centre of centrist parties and we are against extremism and against terrorism, “he said. He added that “Ennhadha remains the main guarantor of respect for the Constitution, the consolidation of democracy and the protection of rights and freedoms while preserving the stability of the country.”

What about the next parliament? On this issue, Al Laareydh, Secretary-General of the movement noted that this will depend on a thorough negotiation.

“We will define our position and political approach in light of several factors, including freedom of the Tunisian people, the country’s security and socio-economic objectives,” noted Laaryedh, stating that these elements will certainly determine the position of the movement.

Ennahdha has not yet decided on the next presidential candidate

After the success of the elections that took place in a favorable climate, Ennahdha will focus starting from Friday on the issue of the presidential election.

A meeting of the Executive Committee and the Shura Council will be held on Saturday to discuss the issue, considered important to the future of the country.

“Our position will be determined, shortly, through consultations with all the leaders of the movement and we will certainly be open to all proposals,” said Ghannouchi who took the opportunity to remind that Ennahdha has no “Nahdhaoui” candidate for this election, but this issue will be discussed with all stakeholders in the political landscape.

UK to boost jobs and trade in Tanzania