HomeFeatured NewsTunisia: the Congress of Ennahdha under the sign of consensus and union
Featured News

Tunisia: the Congress of Ennahdha under the sign of consensus and union 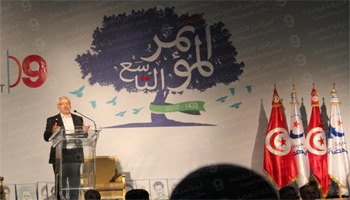 The Chairman of the Preparatory Committee of the 9th Congress of Ennahdha, Riadh Chaâibi, Thursday, kick-started, at the Exhibition Center of El Kram, works of that congress, held from July 12 to 14, 2012 on the theme “Our future is in our hands.”

The Ennahdha, the dominant party in the Constituent Assembly (ANC), after the elections of October 23, 2011 and which leads the ruling troika, is, holding its congress publicly for the first time in Tunisia, after being banned for over three decades.

Five congresses held in Tunisia in secret preceded the ninth under the name of Ennahdha after the Ennahdha movement obtained the legalization of its action on March 1, 2011.

This meeting, which shall elect a party leader, for the next stage, is held after the completion of the renewal of the 261 local and regional bureaus of the party and the election of 1,103 delegates.

The latter will discuss four motions. The first is the general motion which is to define the orientation of the party, its vision and its reading of the current stage and the overall political situation in the country, while the second is the motion that will expose the political viewpoint of the party for political action.

The third motion is the social and the fourth is the internal motion on the basis of which the party will finalize its legal and organizational basis and implement its statutes and rules of procedure.

The chairman of the congress preparatory committee Riadh Chaâibi told TAP that many issues will be discussed during this congress. There is, in particular, the presentation of the party’s conception of the Tunisian state and its political system and the issue of consensus and political alliances during this transitional period experienced by the country.

He added that “there is a desire to raise coalitions to strategic alliances” because of the need for a consensual democracy requiring long-term coalitions. ”

The 9th congress of Ennahdha is attended by national and foreign politicians, namely Khaled Meshal, Chairman of the Political Bureau of Palestinian Islamist movement Hamas, central committee member of the Palestinian movement “Fatah”, Abbas Zaki, Vice- President of the Republic of Sudan, Ali Nafaa Nafaa, the Speaker of the National Constituent Assembly (NCA), Mustapha Ben Jaafar, and members of Ennahdha at the government and the NCA.

Congress of “people’s union and unity”

President of the Ennahdha Movement, Rached Ghannouchi said the party’s congress held “publicly” and not in hiding “is one of the fruits of the revolution that overthrew the Tunisian dictatorship,” stressing that “this conference is that of the gathering and unity of the Tunisian people. ”

He called for “entrenching national consensus, which the country needs at this stage”, and “a national reconciliation based on accountability and the restoration of rights.”

Addressing Tunisians, Rached Ghannouchi promised that the movement “will not betray its commitments to complete the process of revolution,” saying that “all political and ideological currents in Tunisia can coexist in peace and harmony”.

“Tunisia is in good hands,” he reassured, whereas its problems today are “cyclical” and “normal for a country that is experiencing a democratic transition.”

“The movement is open to all who have fought to defend its existence and its principles”, he also said.

The party’s secretary general Hamadi Jebali said, for his part, that the congress is an “outstanding” event between the past based on Arab-Islamic belonging and its present open to all political formations and working for the consecration of the consensus and its future aspiring to a better position through the renewal of the party’s structures and institutions.”

Hamadi Jebali also noted that the previous congresses of the Movement in Tunisia and abroad, were always related to the situation of freedoms and democracy in the country “which shows that the issue of freedom is fundamental in the constants of the Movement and its militant action for four decades.”

He also warned against the dangers of excessive claims, calling for facing the counter-revolution and its “residues.”

“The priority now is to make the revolution reach institutions in order to develop the experience of the coalition which is a strategic choice,” he stressed, adding that “laws on transitional justice must also be enacted swiftly and external debt be controlled. He also called for greater reliance on domestic capital and improving services.”

The party’s secretary general and Interim Prime Minister called on supporters of the Movement to work to ensure the success of elections and enhance the position of Ennahdha in the political landscape.

He also called for further upgrading the party’s cadres “to achieve the highest levels of competence”, and to reform its institutions by broadening consultations and by opening up onto all the energies and ideas. The point is to “preserve the ability of the Movement as a moderating force that polarizes all the skills,” he concluded.