Tunisia: the “Iron Lady” and her projects for SNCFT 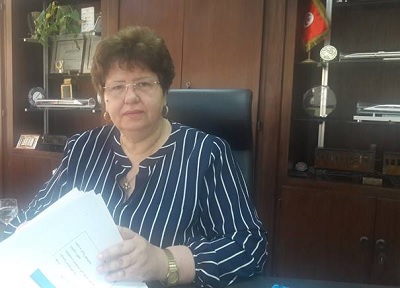 She is a specialist in transportation, a sector where she has spent most of her career and which she knows, from passenger cars to airplanes, buses and trains. Known to be an Iron Lady, she landed a few months ago on the iron roads.

From this sector, rail transport, we speak only when there is a derailment or late train. From its financial difficulties, behind all its shortcomings with tariffs that have not increased in the past 10 years, and its projects, we speak little or no. It is in her capacity as CEO of the SNCFT that AfricanManager spoke to Sarra Rjeb.

On the financial and material situation, which she considers “catastrophic” and that registered a deficit of 71.5 MTD in 2016 to the projects to restore tone to the transport of passengers and the goods.

Projects about which she talked with enthusiasm and who leave her optimistic about the future of the company despite its big difficulties.

Given the highly deficient financial situation of SNCFT, of which you are the CEO, how do you plan to deal with this issue and when a return to equilibrium can be foreseen?

The situation of the company is difficult, especially for its means of production. First, rolling stock that is catastrophic. Our equipment is more than 30 years old. But also, the situation of the railway that requires maintenance and rehabilitation, not to mention the human resources.

What to them then?

We have prepared a corporate restructuring file that targets the three failures. For rolling stock, there is a project in progress to acquire 20 new locomotives for the transport of phosphate, to increase our capacity to transport this ore.

SNCFT has also purchased 13 diesel engines, which will be used to repair other locomotives for US $ 4.4 million. We have already received 8, built by the American NRE. The 5 others have already been received and their delivery will be made shortly.

Concerning the equipment for the passengers, we already put the finishing touches to the specifications for the acquisition of 110 cars.

The invitation to tender for this contract of 200 MTD, presented on 5 June by the Ministry of Transport to the HPR for funding from the State budget, will be launched shortly.

Another contract has already been signed for the acquisition of 50 grain wagons for an amount of 8 MTD from a Chinese company and expected to be delivered in December.

This experience was in fact about passenger rolling stock and we were not happy with the result. Delivered in 2012, the SNCFT still does not have the repair and maintenance manuals and the contract is not yet closed. It was a bad experience and I tell all the Chinese companies that come to present their products to us. For grain wagons, they pertain essentially to metal forging that does not require high technology.

A difference of 131.35% between the factor costs and the ticket price.

13% free riders on the suburbs and 3% on the main lines, i.e. 1.3 MTD of loss of earnings. 502 trips removed on long-haul routes and 1.6 MDT losses on phosphate. 5 MTD losses on the transport of coal coke at Gabes. An average age of 33 years for locomotives, 38 years for goods. Expanding debt to SNDP and CNRPS

Why not doing it at home in Sidi Fathallah which has become redundant?

In fact, if we have not yet launched the other tender for 400 phosphate cars and 150 freight wagons, it is mainly because we are still thinking of a solution of this kind in Sidi Fathallah.

There is a solution for the manufacture of wagons for the transport of phosphate or passengers, at the Sid Fathallah workshops where we have 40 hectares, workshops, a covered area of almost 10 hectares and where we already build a wagon storage area of the RFR which will be delivered to us by “Rotem-Hyundai”.

All this, not to mention the 5-hectare workshop in Bizerte, abandoned by the SNCFT and whose site suits better to such a project of construction of wagons, especially with the proximity of the port. We have an offer for such a partnership from Turkey where they do things at the cutting edge of technology and quality equipment as I have personally realized.

We also have another offer from a company based in Malaysia. Such and other projects could be discussed at the next meeting of the African Union of Railways, currently presided over by SNCFT, at the General Assembly in Tunis.

And about the financial situation of SNCFT, what can the top official say?

It is very difficult. But it is expected that SNCFT will return to equilibrium by 2020, if all the measures we have requested for it are carried out. First of all, there is the state’s assumption of the company’s debt, in particular towards the SNDP. There is already good news. The State has indeed decided to take over this debt up to 154 MTD.

We also have a debt with the CNRPS and we request a takeover of the State up to 90 MTD. But we also demand and above all the authorization to increase, on a periodic basis and even in small doses, our rates on the main lines from this year.

A file should be submitted by the Ministry of Transport to the Prime Minister for an increase in tariffs for the entire sector.

What are the current or immediate projects of the company, except the RFR that will be managed by the SNCFT?

It will, indeed, be managed by our company. It has launched the tender for the acquisition of the 28 trains of the RFR by Rotem-Hyundai, the construction of the depot and the maintenance at Sidi Fathallah.

In conjunction with the start-up of the RFR, there is the re-development project for the current station in Tunis. The RFR is expected to increase the flow of passengers and we are introducing a new contactless payment or collection system in Transtu (Bus and Metro).

This project will be extended to the SNCFT and the RFR and that will put us at the forefront of technology in this area.

But the re-development project will also involve the expansion of the existing passenger station to properly manage the flow of passengers of the RFR as well.

The funding will be on the RFR project, but the SNCFT will be the project owner.

All this, beside the great project of the Barcelona Square, made by Transtu, which will put the Metro on the surface and put the buses underground and will return this square to the city.

Tunisia, 2nd destination of Russian tourists this summer after Turkey