Tunisia: this is why the TND is lower than the € 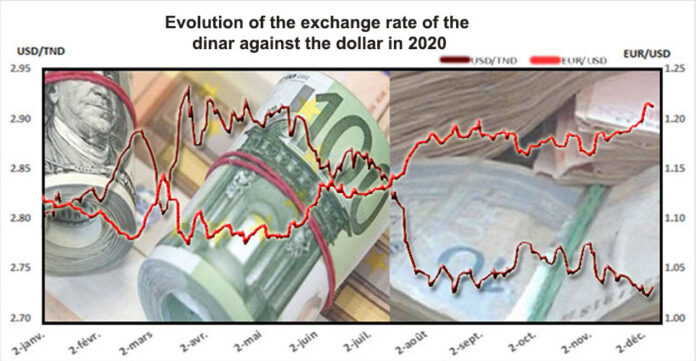 The commercial center, and to a lesser extent the financial center because it follows more the trends, had then a little worried, not knowing if it was a new downward trend due to the domestic economic situation or the resurgence of expectations.

It should be recalled that the determinants of the evolution of the TND exchange rate are three: the international market which is an exogenous factor, the liquidity that has been reinforced by the 15.5 billion banknotes and coins in circulation and the anticipation, until now calm as evidenced by the 13% drop in imports last October, according to INS figures.

Questioned by Africanmanager, an authorized source of the Central Bank of Tunisia (BCT) gives the right answer straight away. “It is rather the € that goes up, not the TND that goes down,” said our source who prefers to remain anonymous.

The source explained indeed that the domestic determinants (liquidity and expectations) have not changed, and that this small decline in the value of the DT lies, this time, in the determinant € / $.

“The € has in fact appreciated by 3 figures on the international market. Against the USD it was at 1.18 and it is Wednesday at 1.21, and it is in the process of appreciating against everyone, in a pendulum effect in relation to the $ (USD) “.

This appreciation of the European currency, which could be therefore explained by a COVID-19 effect in a Europe more involved than the USA in the vaccination process, which clarifies a little bit the prospects of the revival of its economy by boosting its performance.

“In addition, the $, which is the safe haven currency in times of international crisis, has also benefited from this phenomenon.

But, and just as paradoxically, the semblance of control of the pandemic by the launch of vaccination campaigns, which has somewhat eased market concerns, has depreciated the status of the $ as a safe haven. This benefits the € that also benefits from the good management of the pandemic and access to vaccination”, the BCT’s authorized source tells us again.

More anchored to the €, the Moroccan currency follows it in relation to the Dinar

And when asked for an explanation of the depreciation of the TND, even compared to the Moroccan Dirham (MAD), our source finds the answer very simple.

“The MAD is anchored at 60% against the € in an almost fixed parity, and thus follows the value of the European currency and defends this parity dearly through its stock of reserves”, explains our authorized source.

He added “in Tunisia, we have a de facto anchorage, but in a more flexible regime and evolves according to market transactions, with a much more rigorous management of the stock of reserves”, which therefore exceeds 150 days of foreign currency reserves.

All this to say that for the TND, the decline is not structural and due to internal factors, but to the effect of the appreciation of the European currency on the international markets.

This could make imports expensive for Tunisian operators.

But, as can be seen in our graphs, this also translates into a slight appreciation of the TND against the $. And this will impact, this time positively, the payment of a Tunisian debt, which is mostly denominated in US currency. And about debts, Tunisia will, indeed, have to repay several billion TND from 2021.

And when we ask our source if this decline in the value of the TND is a trend that is being confirmed, or simply an effect of a volatile international economic situation, it remains optimistic about a rapid correction.

Indeed, on December 8, the TND already started the correction, as one € was traded at TND 3.2949. The difference is certainly in decimals, but it was there.