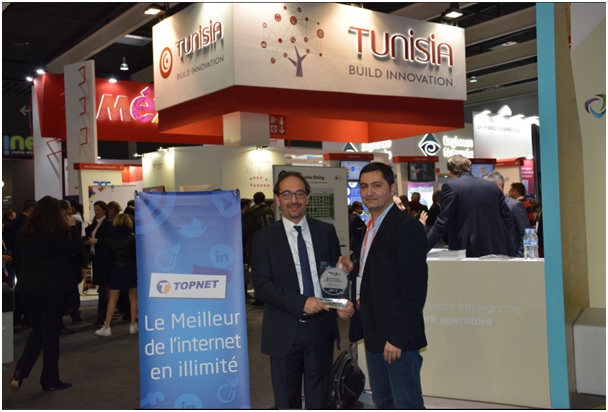 The Tunisian Internet Service Provider (ISP) TOPNET received, on Tuesday, February 27, 2018, at the Mobile World Congress (MWC 2018) that took place from February 26 to February 28, 2018 in Barcelona, ​​Spain, the nPerf-THD Award for Best operator in the quality of fixed-line internet connection for the year 2017 in Tunisia.

TOPNET, the leader of Tunisian ISPs and a subsidiary of Tunisie Telecom Group, was presented the award at an official ceremony at the Tunisian Pavilion as part of the MWC2018, in the presence of Arik Benayoun, Business Manager at nPerf, Nadya Jennene, editorial director of THD.tn, Elyes Ben Sassi, CEO of Topnet and Mohamed Fadhel Kraiem, CEO of Tunisie Telecom Group.
“We have recorded more than 180,000 tests performed by Tunisian IP addresses on our measurement servers in Tunisia. Our measurement tool available on www.nPerf.com and its mobile application as well as on the website of our Tunisian media partner www.thd.tn has, therefore, analyzed the flow tests of Tunisian Internet users from January 1, 2017 to December 31, 2017 and it comes out that TOPNET arrives at the top of the charts of the best download average flow over all the year 2017 “, Mr. Arik Benayoun affirmed on the sidelines of this ceremony.

On the occasion of this ceremony, Mr. Elyes Ben Sassi, CEO of TOPNET said to be “very honored by this distinction which crowns the efforts of TOPNET in the improvement of the quality of service and the customer experience “.

He added that “TOPNET will pursue its broadband development strategy to meet the demands of the digital economy”.

Nadya Jennene, editorial director of THD.tn, commented: “As the first multi-platform Tunisian media company specializing in new technologies and digital, THD.tn is pleased to join forces with the French company nPerf in monitoring the quality of Internet connection in Tunisia to reward the best Tunisian players in the Tunisian Net.

As a serious and responsible media, THD.tn has for 10 years not stopped campaigning to popularize the digital culture in Tunisia and to encourage operators, ISPs / ISPs and Startups to participate actively in Tunisia’s digital revolution to build a better future.