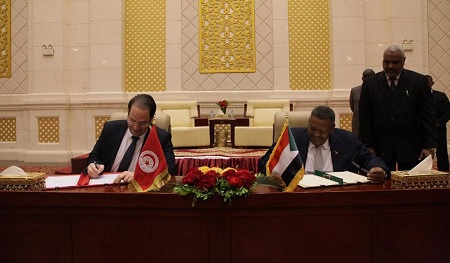 This air link will deliver a boost to cooperation and increase the pace of visits and business between the two countries, he said.

The agreement was reached at the closure of the High Joint Commission meeting, held Thursday in Khartoum under the chairmanship of Youssef Chahed and Sudan’s First Vice-President and Prime Minister Bakri Hassan Saleh.

Twenty-two accords were inked in addition to memoranda of understanding in several economic sectors.

Chahed told a press conference Tunisia intends to join no later than the end of this year the UN Economic and Social Commission for Western Asia (UN- ESCWA).

Getting the Joint Commission meetings back on track demonstrates Tunisia and Sudan’s keenness to bolster cooperation, he highlighted.

The agreements concluded will likewise be followed up.

Works of the present commission will give a fresh impetus to bilateral relations in a wide array of sectors such as transport, services, tourism, agriculture and technical cooperation, the Premier indicated.

The meeting of the Tunisian-Sudanese Business Council and the Economic Forum, held concurrently with the High Joint Commission, will foster relations among economic operators in the private sector and boost trade.

Libya: Govt. to supply natural to all Libyan cities