HomeInterviewTunisia will enter an uncertain period, without a compromise in coming days,...
Interview

Tunisia will enter an uncertain period, without a compromise in coming days, according Jemai Guesmi 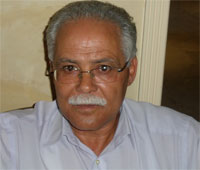 Holding the government of Ali Larayedh responsible for what is happening in Tunisia today, Jemai Guesmi political analyst believes that the two political forces are seeking to find a staging area for the current situation facing the country and which has become more complicated since the assassination of Mohamed Brahmi and the tragedy of Mount Chaambi.

What is your assessment of the current situation in Tunisia?

The situation, in my opinion, is disastrous, complicated and is becoming increasingly worrying at all levels. At the political level, the landscape is especially difficult with political infighting that set fire to the powder in the presence of two different forces. One of these forces still believes in an “imaginary” legitimacy and the other claiming the dissolution of the current government for the purpose of forming a new technocratic government headed by an independent national personality in order to save the country which is experiencing an unprecedented crisis.

There are many initiatives and negotiations continue between the different political forces. I think they will manage in the coming days to develop an initiative to break the deadlock.

How can this mission, deemed “impossible,” be a success?

Agreeing on an intermediate zone is, in my opinion, an appropriate solution to address the current crisis and this for two main reasons. First, the heavy weight of the main workers’ organization in the political landscape and its strategic role to ensure this initiative and the second reason relates to the willingness of the opposition to show such flexibility in order to avoid the shock.

However, I think the success of this initiative is dependent on the nature of the security situation already in sharp decline. Thing that could threaten the cohesion of the home front in the country and, eventually, plunge the country into chaos, and the ruling Troika will be the first beneficiary of this situation.

What is you reading of the speech of Minister of the Interior, Lotfi Ben Jeddou?

The revelations made by the Minister of the Interior are just excuses to justify the failure of the current government. I would have liked a resignation of Lotfi Ben Jeddou by assuming his political and ethical responsibility for the incidents that took place recently, from the assassination of opposition politician Mohamed Brahmi to the discovery of homemade bombs and the massacre of 8 Tunisian troops deployed in Mount Chaambi last July 29.

I think what is most dangerous in the recent statement by the Minister is the confirmation of the infiltration of the security apparatus by Salafists. In my opinion, this is something that should push the Minister to resign by holding the government of Ali Larayedh responsible for what is happening in Tunisia today.

A speech of the official in charge of the sovereign ministry will certainly have effects?

Fears are many and I think this speech will have a direct impact on the Tunisian street by trying to push it into a serious crisis. If these events continue, I assure you they would have an impact on state institutions. This should be taken into consideration by the leaders to transcend this step.

Another note, I think the Somal-isation of Tunisia by the Minister of the Interior will affect not only the political aspect but also the economic aspect. It is a blow to an economy that cannot afford other disasters. It is useful to remember that the economic system is already half-mast with the deterioration of the tourism sector and the cessation of production in several plants like phosphate. Add to that the decline in remittances from Tunisians living abroad.

So what to do?

The various political parties should take into account the sensitivity of the current situation of the country, already threatened, according to several experts, by economic collapse and chaos.

For now, I think it is urgent to find a compromise between the Troika and the opposition in order to prioritize the country’s interest and each party shall bear its responsibility to be able to overcome this critical stage.

This can only be done through the establishment of a mediation area approved by all stakeholders. In this context, I think the initiative of the main workers’ organization could be seen as an appropriate solution to resolve this crisis.

But if the ruling parties, Ennahdha, in particular, and opposition parties are unable to reach such an agreement, which would be the other scenario?

If the political class can not find “appropriate” solutions to the current crisis facing Tunisia in transition, the country will enter an uncertain period whose effects will be even more dangerous.

The political class should react to bridge the gap between the different components of society.

What is your message to the stakeholders especially in these rather special circumstances?

I call on political parties to put aside their differences and beliefs to reach an agreement on forming a new government. This is useful to ease tension on the one hand, and to reassure citizens in this tight climate on the other hand.