HomeFeatured NewsWould Saïed have finally helped his Prime Minister to get out of...
Featured News 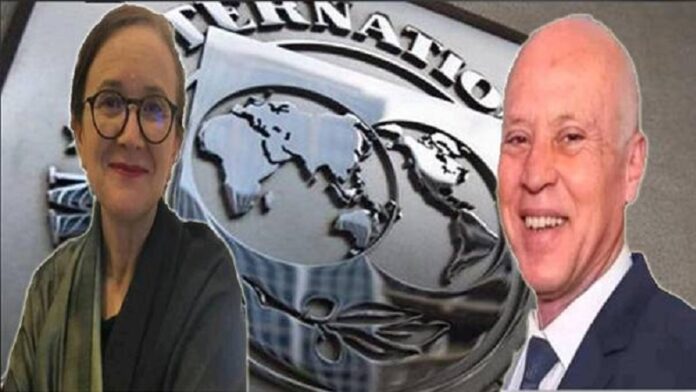 There is now no doubt that the accounts of the Tunisian state will not improve without recourse to loans. The Tunisian economy will certainly hobble for a few more months, and is already performing the monthly miracle of paying salaries and pensions. But it will not recover without the reforms required by its donors. Indeed, these reforms are unanimously agreed both internally and externally. Resorting to local banks has its limits. Forcing the BCT to finance the budget puts it in a bad position with regard to donors who demand independence of monetary policy.

“Tell me if you can, I’ll give you what you want,” the IMF seems to be saying.

Addressing the head of state of a country with a market economy, certainly with a social component, the IMF also stressed, as in a reminder of its conditions to help, the need for   “strengthening competition and opening up the economy to private sector investment would help unleash Tunisia’s potential for inclusive and much-needed job-rich economic growth.”

President Kais Saied, on the other hand, preferred to make populism, pointing out that “there are a number of rights enjoyed by human beings, such as the right to health and the right to education, which are not subject to profit and loss measures”, and that “people are not mere statistics, but we must adopt a comprehensive approach that leads to finding solutions to all the issues and problems raised.”

One would have thought that the atmosphere of this meeting, which lasted more than an hour and a half according to our sources, could have been heavy and one awaited, anxiously, the “Read-out” of Jihad Azour, generally known to be “an IMF fundamentalist” according to our source. However, this seems to be only a communication intended for local consumption.

Our source tells us, in fact, that at the end of this meeting with Kais Said, “Azour was on a cloud”, and seemed to share the view of the head of state, and convinced of his arguments in favor of a new financial assistance program of a volume of 4 billion USD.

That feeling was reaffirmed during his meeting on the same day with Prime Minister Najla Bouden, all smiles on the photo as his guest.

Later the same day, the sentence fell in a statement in three languages of the IMF. “After several months of technical discussions with the Tunisian authorities, we are ready to start program negotiations in the coming weeks,” said in substance the statement that sounded like the beginning of the way out for Tunisia.

“Life isn’t about waiting for the storm to pass, it’s about learning to dance in the rain,” said Ghandi

We will not pass over this paragraph of the IMF communiqué, which defines all the political problems of this IMF package and its social risks for a Kais Saïed who is preparing an electoral plebiscite via the referendum that he is simmering. “Home-grown reform program, as presented by the government, has the benefits of stronger ownership and greater credibility, and thus of a greater chance of success than in the past. Ownership over reforms matters a great deal, with or without an IMF-supported program,” said Jihad Azour who was certainly thinking about the poor image of an IMF whose aid packages have left a trail of smoke behind them every time.

“We, therefore, welcome the recent publication of the government reform program. It is also very important to further articulate the specific policies and reforms and discuss them with all stakeholders so that they unite around the government program and contribute to this effort. Thus, continued dialogue with key stakeholders together with broader communication should help increase the chances of success.”

This paragraph of the IMF statement, it should be noted, suggests that nothing has been done yet, far from it. The IMF is first asking the Bouden government to communicate, extensively and in detail, on the measures it intends to take to implement the promised reforms. You might as well tell a population called to “vote” Saïed before the end of the year, what a bitter pill he will have to stoically swallow, to reassure the IMF that it will not be accused again of “screwing up” everywhere it goes!