HomeInterviewThe Tunisian market will be stronger and more effective compared to other...
Interview 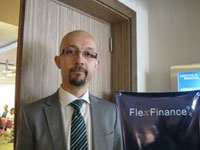 Dieter Van der Stock, Product Manager at “Fernbach Financial Software” considers that the application of universal standards and codes by Tunisian banks could help not only to implement restructuring plans, but also to attract investors to set up businesses in Tunisia.

How do you see the current economic climate in Tunisia?

For this stage, I see that the Tunisian economy has become increasingly dynamic. In these times, there are much higher growth rates than in Europe. For example, in our company, we see many opportunities to invest and create new projects in Tunisia.

And for the banking sector?

We note that the Central Bank is encouraging the different banks to implement international norms and standards, specifically international financial reporting standards (IFRS), Basel II risk management and other standards.

So we can say that the central bank is very active in seeking to implement these standards in the banking sector. This shows that the Tunisian banking sector is evolving despite some weaknesses and is becoming a serious competitor to banks in other countries.

Encouraging remarks, but there are also many failings of the sector?

I have conducted a lot of studies around the world. I traveled to Asia, Malaysia and Nigeria as well to Sub-Saharan Africa, Gabon and Ghana, and I found that achievements have been recorded in the banking sector in Tunisia despite the particular climate that prevails in the country.

Personally, I see a lot of opportunities and a great potential of skills who have contributed to the development of the sector. This is very significant. For us in Europe, we had probably made good deals in the past, but today, Europe is slowing down compared with other countries like Tunisia.

I am sure that in the coming years, the Tunisian market will be stronger and more effective compared to other European markets.

So which role is your company called to play in this process?

We have an experience in implementing software, and this in order to assist banks to comply with IFRS standards around the world. Indeed, we have settled in South Korea, Indonesia, Malaysia and other countries in Africa, Egypt.

We have worked for major banks, but also for small banks and sophisticated banks with structured products and many unique challenges. We also worked on fairly simple banks with less diversified products.

I think we can bring a wealth of experience in supporting the Tunisian banks to comply with international standards.

Our software is not only one that should be programmed to follow the accounting rules, but it prepares-controls with a series of best practices that involve accounting rules and other rules of risk management, approved by the four major audit firms.

In this context, we can state that they are in compliance with the international rules of IFRS and especially Basel III.

This approach will allow the Tunisian banks to leverage the investment they make in ensuring compliance in order to conduct a thorough analysis of their provability in such a manner as to increase their profitability.

This analysis does not mean that we will provide tools for banks to provide software that ensure transparency in terms of figures. We also provide tools to manage accounts in case of loss. We may cite as an example the approved tools that allow banks to stabilize their accounts. If you implement simple rules, you can have a volatility in the income statements. However, with our software, we can help banks to reduce this volatility by giving a better image in the market.

With these standards, would the banks be able to improve their image, especially with rating agencies?

What is important is that the IFRS are international standards. For example, when an investor wishes to invest in a bank, he will, first of all, look at the financial statements. In this context, he must have confidence in these states. Something that can be done only with income statements comparable to those of other developed countries. Hence the importance of implementing IFRS not only to please the central bank, but also to encourage investors. In addition, the IFRS accounting is an accounting system that uses fair value considered as the best value of assets of such banks.