HomeFeatured NewsBusinessman and "Big brother", Fakhfakh says no to Taboubi and lets down...
Featured News

Businessman and “Big brother”, Fakhfakh says no to Taboubi and lets down Mnakbi 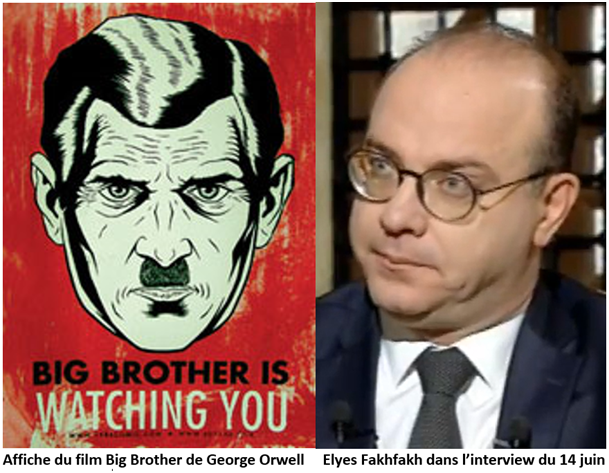 He has not been thanked enough for defeating the Coronavirus, so he makes himself comfortable to congratulate himself in a long interview, where once again he set aside the public media.

He would even like the country he governs to forget all that awaits it and of which he still knows nothing, to celebrate this victory brought to it by Elyes Fakhfakh.

“We came out of it with the least amount of pain and with very good results. For the future, don’t worry, we’ve been working on it for a month and a half.

Thus spoke Zarathustra. Until then, it is almost normal, since the Prime Minister, who was celebrating his first 100 days in office, had only COVID-19 to point out.

Fakhfakh “Big Brother” and “guard of prison-hotels» for tourists!

In passing, we learn that “Big Brother is watching you”, to paraphrase George Orwell, when the Prime Minister told his people that “we controlled the movement of the population via SIM cards in their phones, through the operations room [Editor’s note: of the Ministry of the Interior] where there were 87 senior officials who took turns there”.

Fakhfakh then made the mistake of saying that the National Authority for the Protection of Personal Data had given its consent for this, which Chawki Gaddes denied.

In passing also, and as the good Prime Minister concerned about the revival of tourism (15% of GDP), decided that, contrary to the Tunisian expatriates, foreign visitors would come to spend their holidays in Tunisia this summer.

“When they come, they will be kept in mandatory hotel confinement. They are not allowed [Editor’s note: to go out]. They will stay in the hotel. I will prevent them from going out of course”, insisted Fakhfakh who had not then wondered why a tourist would leave his country where he could freely spend his holidays, would want to come and recover in confinement in Tunisia?? FTH was clearly right to reject these discriminatory constraints!

Prime Minister, shareholder of companies that do business with the state!

But we also learnt that the Prime Minister is a 20% shareholder in a company operating in the environmental sector, of which he claims not to be the direct manager.

The company works with the State, but he considers that this does not constitute a conflict of interest! “I’ve taken stakes in two or three companies of less than 30%,” he said, offended that this kind of issue was being raised, but he did not say what kind of business his company has with the state whose executive he heads.

As a shareholder, he nevertheless receives a dividend on the profit made by this company, or more, part of whose turnover is made with the State!

No, no money for Tunisair, and no pay hikes

Speaking of the Tunisair situation, the Prime Minister, like Youssef Chahed and as his Minister of Transport had said, refused to give Tunisair the money it needed to get out of its financial crisis and get back on its feet. “There will be no more pills.

Tunisair has its own financial means, both abroad and in Tunisia. Let it tell us what it did with those resources. It has its own plan. Let us be told where it is,” he said sternly and with a closed face, before adding, as a threat to Elyes Mnakbi, that “we cannot trust anyone who does not know how to manage the people’s money well (…). Save it, all right. But not on the basis of incorrect principles, but on the basis of new principles”!

Referring to the outcome of a four-hour meeting with the UGTT, which would like to relaunch negotiations on wage increases, Fakhfakh evades frank and direct answers and prefers to threaten.

“If this continues, and the bleeding is not stopped, the pensions and salaries of civil servants could be cut. We can’t keep raising salaries.

We can’t keep leaving state-owned enterprises the way they are. There will be no privatization, but reform and work. We cannot keep seeing people who are not working and keep silent. We will not be able to continue to see the port working at a third of its capacity and keep quiet. It’s not responsible for (…). With the UGTT, we are still talking. The State is a bad manager, but there is no solution other than to sell the jewels of the State”.

He then qualifies his answer by refusing any salary increase or promised bonuses, and keeps for himself a margin of manoeuvre by saying that “everything will be put on the bargaining table, in transparency, and accountability as well. We won’t risk the bankruptcy of the state. For the debts, the external ones will be reimbursed and the local ones will be restructured.

Concerning the confiscation, a file reopened by his Minister of State Property Ghazi Chaouachi to extend it to other people who would have been linked to the 1st list of more than 160 personalities of the former regime, the Prime Minister was careful not to condemn or even oppose what his left-wing minister is doing.

He simply said he was sorry that the problem could not be resolved under the IVD of Sihem Ben Sedrine, and recalled as a preference or as a new way, “on the table and not underneath” he said.

In doing so, it is as if to point out all the skids and blackmail exercised on those concerned by the confiscation, to close this file by the bill on a judicial reconciliation that is being prepared by the Head of State and that he would discuss with him.

Elyes Fakhfakh also admitted a “difference of point of view” with the leader of the Tunisian Islamists and Speaker of the Parliament.

However, he dodged the question of his ability to deal with a possible motion of censure of Ennahdha, claiming that he owes his position to God, and saying to the Nahdhawis that “it is a partner in my government.

I don’t need any more in this coalition. For the moment it is successful and achieving success. If it finds another way, too bad, God help them,” refusing to accede to Rached Kheriji’s request for a cabinet reshuffle that would bring the Qalb Tounes party into government.