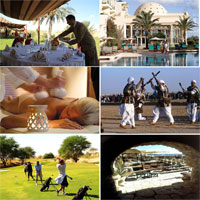 Chérifa Lakhoua, Research in Hotel Management and Tourism, analyzes the impact of the political crisis on one of the key sectors of the Tunisian economy, tourism.

In an interview with Africanmanager, she makes recommendations for the revival of tourism and promoting the image of Tunisia as a destination.

The tourism sector suffered the brunt of the impact of the political crisis facing the country since the assassination of Chokri Belaid. All indicators are flashing red: revenue, occupancy, arrivals and overnight stays, in addition to investors, who are withdrawing one after another. What do you think?

The development of the tourist activity is similar to that of trading of the shares of multinational companies on major international exchanges. Thus, the price of a share of a multinational will fluctuate downwards or upwards depending on information on the political, economic and social events underwent by the country of origin of the company, according to information on the product or the company itself and the institutional or commercial communication which the company issues by its own means on itself or on its products.

Tourist destinations in the world, of which Tunisia is an example, are precisely true multinationals whose main activity is the design, distribution and communication of simple or integrated tourism products on national and international markets. The main objective of this destination is to record an annual growth of its achievements (domestic market revenue, international market revenue, number of entries, overnights, spending per tourist …), to increase its market share in the world and improve its competitiveness compared to other similar destinations operating on the same markets.

Therefore, any political, social or macro event that takes place in that destination which is covered by the media at national and international levels will influence the objectives and plans of this tourist destination, and it is in order to reduce this impact of the “negative” media coverage of the destination that existing governments and corporations in the tourism sector are making an ongoing effort to send positive signals (diplomacy, media, international tourism events …) and implement communication campaigns to promote and improve the position of their destinations and their tourist products.

The relationship between political, economic and social instability and achievements in the field of tourism is well established; it is a direct relationship as reflected in the following data:

What is the year to be chosen as a reference year?

The reference year can only be 2010, because 2011 is naturally considered as a disastrous year.

The end of the year 2012 was marked by a major event which is the attack on the U.S. embassy on September 14. This event had a negative impact on bookings for the winter season which is especially oriented towards Saharan tourism.

The consequences of this event did not take time to come, following the attack on the US embassy in Tunis: 14 cruises, expected to stop and bring about 40,000 tourists in Tunisia until 2012, were canceled. The assassination of Chokri Belaid strongly affected this major sector that employs over 400 thousand people. Moreover, Tour Operators (TO), operating on the destination Tunisia, have cancelled bookings. Can you give us some clarification?

400,000 jobs? Some put this figure at 1 and a half million job positions directly or indirectly connected to the tourism sector.

On February 6, the murder of political figure Chokri Belaid dealt a blow to our tourist season in 2013, in full European Easter holiday period (March / April), in addition to the multiplicity at the beginning of the year, of international tourism fairs in Europe (February / March) and the launch of the communication campaign targeting European markets supported this year by the unique French communication company Publicis.

At the beginning of the year, tour operators have a certain rhythm of booking for the Easter holidays, all Western markets without exception saw this pace down and more cancellations were noted in the wake of the assassination of Belaid. This phenomenon has been observed in the British, French and Russian markets…

Despite the state’s efforts, actions have failed to revive the tourism sector. What are the challenges faced by the sector?

A strategic study conducted by the Berger Office whose results were published in late 2010, summarizes all gaps of the sector. We may mention a few of them:

– Information and communication technologies with many opportunities in the area but not used by our operators.

– No label or standard specific to our tourism products have been developed, and only a few operators are investing in the area of certification to international standards.

What to do to ensure the survival of this sector in a complex environment?

Domestic tourism, stepchild of our national tourism, will be one of the survival strategies that the sector could develop.

We all know that in international marketing, a company is more likely to succeed in foreign markets when it has already managed to convince the local market and neighboring markets of its product. This is confirmed by the position of the 3 main tourist countries of the world, namely the USA, Spain and France. Thus France is the top tourist destination of the French.

In 2010, 71.9% of the French spent their holidays in France and 23.9% went abroad. The main U.S. customers belong to neighboring countries and this is the same case for Spain.

Markets of Tunisians, Algerians and Libyans will therefore be those that will allow our tourism to overcome this crisis with the least damage.

What are the actions to be taken?

Perhaps professional deformation, as marketing specialist, I consider that a company can not succeed and achieve its objectives if it misses its communication and if it does not conceive a marketing plan and strategy based on a study of served markets.

Thus, the first criticism that can be leveled at public institutions responsible for planning marketing in the tourism sector is a lack of responsiveness and adaptation to changing demands and expectations of tourists in the world.

These institutions have only segmented our market exclusively by issuing country, that is to say, we have not stopped for twenty years, designing tourist offers for different consumer groups, each group characterized by a different nationality.

Only a few forms of most sought segmentations were adopted by some private tour operators, such as the market for senior citizens, the MICE market… but these forms of segmentation have never advanced to the level of a true national communication strategy.

New techniques for segmentation based on socio-styles are increasingly used by operators and institutions of the biggest tourist countries (USA, France, Spain …).

In addition, the national communication on the destination Tunisia has always been a communications under the brand of “umbrella;” it has always been the promoter of our destination as a whole: Tunisia. However, we know that in countries that have succeeded in their tourism development, the promotion of sites is made at the regional level (Marrakech, Brittany …), local (Saint-Tropez, Ibiza …), or even at a very specific integrated tourist product (Euro Disney …).

The national communication strategy should be decentralized in tourist regions in which tourism operators and public institutions will better control their strengths and weaknesses, their competitive advantages, the expectations of their potential tourist customers and complaints national and international tourists.

This year, it should be noted that the new strategy of ONTT involved primarily standardizing the image of Tunisia by opting for the choice of a single agency responsible for developing the corporate communication strategy of the destination in target markets.

The campaign, which began in early 2013 and was presented in December 2012, will highlight products with high added value such as cultural tourism, Saharan tourism and wellness tourism and emphasis will be placed on the promotion of alternative tourism. These campaigns will be oriented according to the specificities of each market.

Thus, the general management of ONTT will, this year, have greater flexibility than in previous years, as it will have only one partner and not an agency by market as in the past.

The approach aims to bring about on the international scene a single image of Tunisia always authentic and open to the world.

Hopefully this time it will be the right choice.

Is it not time now for a national day whose mission will be to stand as an interlocutor for the next government?

Instead of one national day, public and private stakeholders in tourism must learn to listen to each others during the numerous annual meetings, to exchange ideas, proposals, initiatives, … In short, limiting the problems of our country to a single national day is underestimating the importance of the crisis faced by our country in all sectors, particularly in the tourism sector.