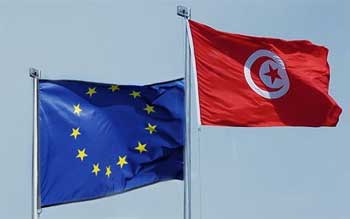 The EU and Tunisia held their second Association Council yesterday in Luxembourg, during which they sealed a political agreement on the Privileged Partnership, in the framework of the new Action Plan. They also took stock of achievements and discussed future steps in cooperation between the EU and Tunisia, as well as regional issues of common interest.

The Association Council was chaired by the Greek Deputy Foreign Minister Dimitris Kourkoulas on behalf of EU foreign affairs chief Catherine Ashton. The European Commission was represented by tefan Füle, Commissioner for Enlargement and Neighbourhood Policy. The European External Action Service was represented by Bernard Savage, Head of the Maghreb Division. The Tunisian Delegation was led by State Secretary for Foreign Affairs, Mr. Faisal Gouia.

During the Council, the Tunisian Delegation recalled the recent positive political and institutional developments directly related to the adoption of the new Constitution, stressing the importance of strengthening bilateral relations through the implementation of the Privileged Partnership with the EU. Tunisia has also highlighted its expectations vis-à-vis the EU in terms of political and economic support, as well as its priorities in trade and mobility.

The EU reiterated its full support for Tunisia’s transition process, highlighting the importance of implementing the new Constitution and strengthening human rights, fundamental freedoms and the rule of law. The EU affirmed that it recognises the significant socio-economic and security challenges that Tunisia faces and assured its increasing support. The EU stressed that it remains convinced that the economic and social prospects of Tunisia largely depend on the evolution of the political transition, the consolidation of its institutions and its banking sector, and modernisation of the management of public finances, but also the adoption of structural reforms, which requires continued dialogue between social partners, highlighting the role of civil society.

The EU reiterated its offer for a progressive integration of Tunisia in the European internal market, a resumption of negotiations for the liberalization of agricultural and air trade, and increased support for SMEs through the participation of Tunisia in EU programmes and through entrepreneurship initiatives.

This Association Council was also an opportunity to recall that the EU’s offer also relates to the improvement of mobility for European and Tunisian citizens through the implementation of the Mobility Partnership signed on 3 March. Recognizing the concerns expressed by the Tunisian civil society, the EU reiterated its commitment to respond in a responsible, comprehensive and balanced way to all aspects of migration, without security obsession, while providing a coordinated framework of cooperation with ten Member States which are committed alongside Tunisia to making this partnership a success.

The EU presented to the Tunisian authorities the new financial instrument to help neighboring countries, the European Neighbourhood Instrument (ENI), that will benefit Tunisia under the new Multiannual Financial Framework 2014-2020. The EU recalled that assistance to Tunisia had almost doubled since 2011 under the previous Neighbourhood Instrument to reach €485 million, 60% of which in the form of budget support. Tunisia is also the first recipient of the SPRING programme dedicated to supporting countries in transition. It was also recalled that in order to help Tunisia to cope with its macro-economic challenges, the European Parliament is about to vote a substantial macro-financial assistance of €300 million in loans at very favorable conditions.

Finally, the Association Council has launched the process of adopting two additional protocols to the EU-Tunisia Association Agreement, the first one regarding the accession of Bulgaria and Romania, and the second one on a framework agreement providing Tunisia access to EU programmes and agencies.

‘Kadhafi millions headIng back to Tripoli’