HomeInterviewFaisal Derbel: Time is not for tax reform due to absence of...
Interview

Faisal Derbel: Time is not for tax reform due to absence of Constitution, development model 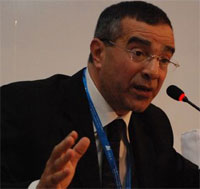 Faisal Derbel, Arab Institute of Business Managers (IACE) Steering Committee member, whom we met at the forum on taxation held in Sfax, recommends the introduction of “firefighting” measures to ensure economic takeoff and launch the tax reform, a task that is difficult in this transitional phase.

What is your analysis of the current tax system?

The tax system contains certain reforms. It has of course undergone some improvements during the last period through the previous reforms. However, many gaps and weaknesses still persist.

What are the gaps?

We also note the lack of resources (material and human) plaguing the administration. Added to this is the pressure that is by no means evenly distributed thus affecting the fairness of the system to the extent that the tax burden which has a similar nominal has a satisfactory rate of 21.5%. Hence the misallocation between occupational groups. While some people subject to industrial and commercial profits see their tax burden fall to less than 10%, there are others, i.e. employees whose tax burden varies between 27 and 28%.

There is also the problem of the complexity of the texts, since, initially, we had more or less clear and legible texts at the time of their promulgation. Over the years, amendments to the laws of finance, tax reform and codes have become more difficult to handle, and there is a set of codes that should be grouped in a single tax code to allow for a better rationalization of the use of tax instruments. Other texts need to be clarified regarding the various stakeholders in taxation

What should be done to reduce this tax burden?

And time constraints are tight, because it is a transitional government while tax reform requires a relatively long time to make a deep and structural tax reform affecting all sectors and areas of taxation.

Is it difficult to engage in tax reform now?

I think it is difficult to engage in tax reform in six months regardless of the will and especially the availability of the current government.

How to act in this situation?

This is a transitional tax that will accompany the economic transition as a whole with targeted and sharp measures oriented to well-defined actions to strengthen, for example, competitiveness and boost investment, knowing that we have a big problem of private investment.

Our investment is down, there is a need for urgent and effective measures to grant exemptions and incentives and make concessions on land, because the investment code will not solve this problem. The goal is to achieve higher rates in investment knowing that we are at less than 50% of private investment. And it is not with this figure that we will solve the problem of unemployment and boost exports. So there must be “firefighting” measures that should be taken in these circumstances to ensure the economic takeoff.

Is the current government able to achieve this?

I do not know.

Dubai will push on with grand plans – ruler