HomeInterviewKais Saied to Africanmanager Nidaa Tounes must meet deadlines and appoint a...
Interview 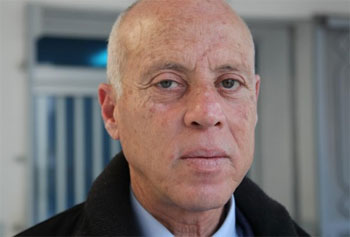 Professor in constitutional law, Kais Saied gave Africanmanager an exclusive interview, in which he called on the party with the majority of seats in the House of People’s Representatives (ARP), namely Nidaa Tounes to meet deadlines as stipulated by the constitution and announce the name of the person who will form the new government.

The constitutionalist also spoke of the marginalization by the political class of the economic and social challenges facing the country today.

Nidaa Tounes has not yet decided the issue of the new Prime Minister, What you think?

The President of the Republic, according to the provisions of Article 89 of the new Constitution must appoint a candidate of the party having a majority in the House of People’s Representatives (HPR) to form the government within a period not exceeding one week after the announcement of the final results of the presidential elections, i.e. Tuesday, 6 January.

The person designated by the President of the Republic and who could belong to the party with the majority of votes in the HPR or otherwise, should form the new government within a month with a possible extension of another month to later go through the approval of the HPR. Therefore, the government must obtain the absolute confidence of members of the HPR, i.e. 109 votes.

However, neither the name of the next prime minister nor the one who will form the government team were decided. We hear of many names but in vain. It seems that no agreement has yet been reached, which explains, among other, the continued political wrangling between parties.

The Nidaa Tounes party must respect the deadlines stipulated in article 89 of the constitution and respect the interpretations agreed under the Act.

The completion of the electoral process in Tunisia, does not it mean the end of political conflicts?

The continuing tightness will remain dependent on coalitions that could be established between the winning party and other political parties with which it will unite, knowing that Nidaa Tounes has not an absolute majority in the HPR and must therefore find partners.

Coalitions may continue as they can be the source of an unprecedented political crisis.

But we note that political wrangling continues in particular in the choice of the next prime minister?

Tightness today is not around a project or a set of political and economic choices but around the distribution of ministerial portfolios. The approval of the Finance Act of 2015 with a comfortable majority is a proof among many others.

And what do you think of the economic and social situation of the country?

The economic and social situation is deteriorating day by day, and prices of commodities continue to skyrocket while nobody bothers about neither the high cost of living nor about the middle class which is getting increasingly poorer.

Worse, no one has presented solutions that meet at least partially to their requests, which were behind the popular uprisings in Tunisia in 2011.