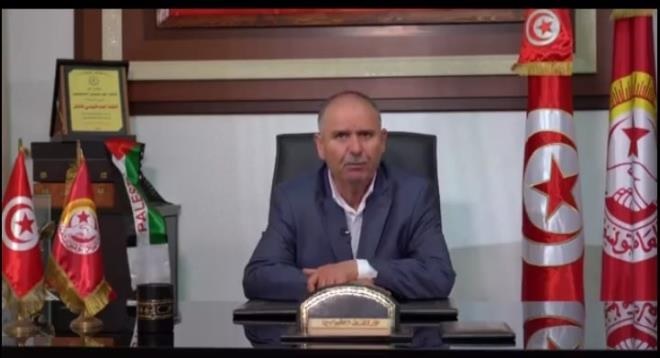 Secretary-General of the Tunisian General Labour Union (UGTT) Noureddine Tabboubi called on Friday on the government to take all the necessary legal and technical measures to stop the levying of the solidarity social contribution (CSS) on workers’ salaries.

In his speech delivered online live from the headquarters of the UGTT on the occasion of Labour Day, Tabboubi pointed out that workers have already sacrificed too much and this contribution has become a heavy burden for them, recalling that they have already donated a working day to contribute to the efforts to combat the coronavirus pandemic.

Tabboubi said it is high time to fight tax evasion, the corrupt and the speculators who continue to enrich themselves at the expense of the poor.

Besides, the UGTT secretary general called on the State to take urgent measures to protect SMEs (small and medium enterprises), which constitute a large part of the Tunisian economic fabric, and craftsmen and small trades that have been forced to suspend their activities in this lockdown period.

Tabboubi commended the political decisions made to stop anarchic import, ban unnecessary goods and encourage local production, particularly in the agricultural and food sector, in order to achieve self-sufficiency.

“We wish that the State continues on this path and also reviews some bilateral trade agreements and debts, especially with major donors, in order to find effective solutions to ensure financial and trade balances,” he added.

He also warned the State against taking unpopular and unjust measures in this critical period.

Tabboubi pointed out that before deciding on deconfinement, the State must take all the necessary measures to ensure the protection of workers in the workplace, calling on the government to be clear and transparent in its discourse and actions.

Furthermore, he stressed that the coronavirus pandemic has revealed the weakness of the capitalist system and exposed social disparities and injustices.

Tabboubi added: “We will no longer accept the violation of workers’ rights in a country where the Constitution guarantees the dignity of the human being and the enforcement of the law.”

He expressed his indignation at the provocative statements made by officials of private health and industrial institutions towards the workers, which have shown selfishness, recklessness and profit-seeking.

In this regard, he stressed the need to implement the agreements signed, particularly that of April 14, 2020, which, according to him, has done justice to the private sector and has been the culmination of the work of the commission in charge of monitoring the situation in the private sector to set criteria and support enterprises in difficulty in order to guarantee the wages of employees in addition to the agreement in the tourism and travel agency sector.

“It is necessary to implement the agreements concluded in accordance with the principles of social dialogue and to preserve the stability of the country,” he stated.

Tabboubi denounced the unfair dismissals and the resumption of activities without the guarantee of protection means for workers in some enterprises.

“Such violations will no longer be accepted and all parties must assume their legal, political and constitutional responsibilities to fight against these violations of human dignity,” he stressed.

He also recalled that the UGTT was among the first to call for the creation of the 1818 Fund to support public hospitals in the fight against the coronavirus and is now a member of the commission in charge of managing this fund pending the urgent reform of the sector.

Tabboubi pointed out that the pandemic has also brought out the urgency of reforming the education sector to build more cohesive and less violent and selfish future generations, remarking that in this lockdown period, violence against women has increased, as have hostilities and discriminatory behaviour.

“We are, however, proud of our human competences that have been mobilised to combat the pandemic and protect the population from violence.

“However, we are proud of our human competences that have been mobilised to combat the pandemic and protect the population from contagion,” he said, praising the efforts of medics and paramedics, cleaners, security guards, soldiers, farmers, journalists, youth, civil society and all those who continue to make invaluable efforts for Tunisia.

“We are also proud of the inventions and creations of youth that prove that we can count on our resources to ensure our technical needs,” he added.

According to Tabboubi, all these efforts have helped contain the pandemic which will eventually disappear leaving behind great changes.

“Indeed, the role of the State and the public sector must be revalued and the rescue of public institutions must be accelerated through a participatory approach that guarantees their sustainability and public nature,” he added.

Tabboubi also underlined the need to put an end to precarious forms of recruitment citing in this regard, contract workers, construction site workers and substitute teachers.

“It is also necessary to find solutions for the most vulnerable categories who live without a steady income allowing them to have a decent life and who have been the main victims of this pandemic,” he pointed out.

In another vein, Tabboubi insisted that the trade union organisation will continue to press for peace in Libya, Syria, Yemen, Iraq and Palestine, especially in this period of pandemic that has weakened all powers.