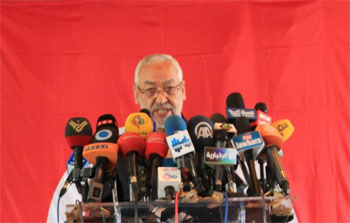 The government will not be dissolved, Rached Ghannouchi, leader of Ennahdha Movement, strongly reaffirmed at a press briefing held Thursday, August 15, 2013 in Tunis, explaining that governments do not fall either by sit-ins or by demonstrations but rather through the implementation of the rules of democracy. “Let us wait for the elections… they will take place in the coming months,” assured Rached Ghannouchi alerting against the chaos that may settle in the country if the government is dissolved and calling on the various political forces to resume dialogue to reach consensus. He also said that the attachment of the Ennahdha party to power is not out of selfishness but for the national interest.

Do not talk about crisis, but difficulties!

Rached Ghannouchi also denied Tunisia is facing a crisis today, saying the country is going through quite a few difficulties such as the call for the exclusion of the Ennahdha party from power and the dissolution of the National Constituent Assembly (NCA), noting that no one has the right to defer or suspend the activities of the NCA. He called, therefore, for the resumption of the NCA to finalize the electoral law and prepare the next elections to be held, as he said, before the end of the year.

He rejected the idea of forming a technocratic government as well as the call of the opposition for the creation of a government of national salvation, considering that it will have a dangerous and negative impact on the country. He also said he believed that the call for the formation of national salvation government is inconsistent with the challenges that need to be met in this difficult period and such a government cannot manage the country in the present state of affairs. He supported, however, the creation of a political committee backing the government, composed of several political figures and representatives of associations. This committee will be responsible for monitoring the work of the government and help succeed, among others, the upcoming elections.

“No Sissi in Tunisia”

The leader of the Ennahdha also said that what is happening in Egypt is a scandal for those who advocate democracy and liberalism. It is, according to him, a massacre and a coup against legitimacy. All those who supported the coup are now unable to respond, he indicated, calling therefore upon Tunisians learn from what is happening now in Egypt and not to deviate from the path to follow.

The leader of the Islamist movement also said that there will be no Sissi in Tunisia, noting that efforts are stepped up to ensure the success of democratic transition seamlessly, recognizing however that the NCA has made mistakes and lagged behind in the process of transitional justice in the case of businessmen, as well as in the development of the new constitution, but according to him, this does not justify its dissolution: “The government is not infallible and is not immune to mistakes, “he said.

The leader of the Ennahdha said, secondly, that most of the concessions were made by the Ennahdha movement and this in the national interest of Tunisia.

He denied, moreover, the information relayed by some media on the presence of certain members of the Hamas movement in Tunisia to train “fighters” of Ennahdha, saying the Ennahdha movement has never committed violence even under the regime of Ben Ali. “We have never legitimized violence even when we were in the opposition. How can we justify it today? “He exclaimed, warning against the” war of rumors “which was, according to him, the cause of the failure of the Egyptian experience.

Neutrality of the administration

Rached Ghannouchi said the government is ready to take all measures and implement all the strategies to guarantee the neutrality of the administration. According to him, Ennahdha is also ready to dialogue with different political parties including Nidaa Tounes, adding that politicians belonging to that party, such as Taieb Baccouche or Beji Caid Essebsi have already participated in the dialogue. He added that negotiations with Houcine Abassi, Secretary General of the UGTT will resume from Monday, August 19, 2013.