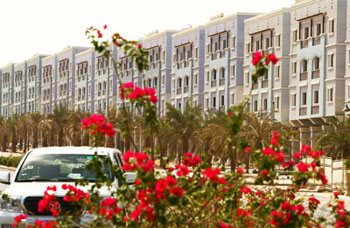 The Saudi construction sector is poised for significant growth over the next few years thanks to the boom in contract awards and ongoing construction activities coupled with healthy lending appetites by bank, said a report.

The level of spending in the construction sector has seen remarkable growth over the past few years and is projected to continue this pattern over the medium-term, stated top Saudi lender National Commercial Bank (NCB) in its review.

Meanwhile, spending on construction has rebounded to 8.9 per cent of non-oil GDP in 2012. Construction spending represented 4.4 per cent of nominal GDP during 2012 and has been steadily rising over the past five years, said the NCB in its report.

To gauge the level of activity in the construction sector, the Gross Fixed Capital Formation (GFCF) reveals a static snapshot of the degree of growth in both, residential and nonresidential construction within the Kingdom.

This indicates the government has put a strong emphasis on expanding the infrastructure sector over the last six years to offset the effects of the global economic downturn, which caused delays and suspensions due to limited commercial financing of many planned projects.

The stagnation in residential GFCF over the last several years hindered the availability of housing units to meet the rapidly growing younger population.

Over the last several years, the construction industry has witnessed a boom in contract awards and ongoing construction activities. As part of the Kingdom‘s initiative to diversify its economy away from the oil and gas industry, the construction sector has benefited from heavy expenditures, stated the NCB.

However, the rebound exhibited between 2010 and 2013 coincides with the growth in contract awards, as the public and private sectors regained their confidence and reinvigorated more lending and construction activities.

As a result, the share of bank credit to the building and construction area relative to total bank credit extended to all economic activities jumped from 6.1 per cent in 2009 to 6.8 per cent in 2012, the report added.