HomeInterviewSlim Chaker to Africanmanager: social-democratic program of Nidaa Tounes is not that...
Interview

Slim Chaker to Africanmanager: social-democratic program of Nidaa Tounes is not that of the 50s or 60s 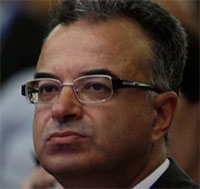 Slim Chaker, Executive Board member of Nidaa Tounes, and coordinator of the Economic and Social Committee gave an exclusive interview to Africanmanager in which he spoke of the outline of the party’s economic program and explained its democratic nature.

He criticized, through this interview, the role of the National Constituent Assembly and noted the absence of a proper budget and an economic and social program, an element that reduces the role of the Finance Act for 2014.

We do not hear much about the social and economic program of the Nidaa Tounes party. Why?

We did not want to do a lot of hype. I think the economic program of Nidaa Tounes is actually part of the electoral program.

Today, they say Nidaa Tounes does not have a program. We said we’ll meet the halfway and will reveal the outline to silence critics who are not very objective.

Don’t you fear that your program does not find an echo and passes almost unnoticed amid the economic and social instability?

Tunisia is in the process of learning democracy and it is a prerequisite that must be respected. We brought out the broad lines of our economic and social program. Our first message is to say: this is our identity and positioning. We began with the revelation of the identity of the party which was its strategic positioning as we heard several unfounded criticism that Nidaa Tounes is a right-wing party or a leftist party of the last centuries, of the years 50 and 60. I say that Nidaa Tounes is neither one nor the other, but rather a party that is in the center. It is a social democratic party. It strongly believes in democracy. It is a party that deals with social problems of people. We give the utmost importance to the social question in Tunisia.

On what bases have you developed your program?

The four pillars on which we have built our economic and social program are social demands, including mainly employment, youth, regional development and social justice. The added value of Nidaa Tounes is we do not copy / paste or we have not taken an old program and cleaned it. Instead, we started from a blank sheet.

You give great importance to regions in your program. Are you aware of the difficulties they face?

Yes, we do, but the situation in regions may actually change only within 20 years at least. But you have to start one day or another, otherwise nothing will be done.

We have skills and ideas in regions, but we have a problem in their implementation! We have extraordinary things, but the difficulty is how to translate them into reality. We are aware that there were 36,000 problems in the regions, but we must begin.

And Nidaa Tounes will it really be able to meet the needs of regions?

We are convinced of our project that holds up. Our program is not imaginary, but ambitious. It is logical and meets the objectives of the revolution. It breaks with the past altogether. It is based on the claims and democracy. Our main challenge today is our ability to establish democracy. And if you get there, everything else will follow, within 10, 15 or 20 years, but we will succeed.

Does Tunisia still attract the interest of foreign and international donors?

Foreigners are willing to help us if we succeed in the democratic experience. Today, Tunisia is a laboratory that everyone is closely monitoring. And everyone trembles at the thought of seeing it fail.

Tunisia has an appointment with history and has no right to miss its revolution because the implications of this success go beyond Tunisia. And if we succeed in our revolution, there will be no problem in attracting investors to find financing and recruit. There will be a new life and a new country that will be in harmony with the aspirations of its people.

We need democratic elections so that there would be legitimacy otherwise we will not succeed whatever the winning party.

What about the status of the former members of the RCD in Nidaa Tounes who were precisely targeted by the Revolution?

I am leader in Nidaa Tounes ! Have you ever seen me in the RCD before?

But we can not deny that there are a number of former RCD members in Nidaa Tounes?

I mean there are a lot of people like Slim Chaker in Nidaa Tounes. The party is today is a mosaic. It brings together Destourians, leftists, trade unionists and independents from the civil society, making the party a mirror of the country. Therefore, it is a representative sample of society.

And if we manage in Nidaa Tounes to solve our problems, position ourselves ideologically, work together and live together, we would have succeeded on a small sample which may be extended after the elections across the entire country.

I see consider diversity within Nidaa a good thing. It forces us to accept each others and live with all the trends.

But some members are accused of corruption?

I quite agree. Let justice do its job, but we can not replace it. If someone has done something, he must be brought to justice.

Would you not risk yielding to the regionalist pressures?

We are aware. But the economic program of Nidaa Tounes is based on the logic that we make no promises. So we are far from that risk. Our vision is based on a diagnosis, a strategy and action plan. We do not make promises.

At the regional level, it is necessary to make a diagnosis. There are people in regions that are driven by good will, and it gives me hope.

Do you feel that the situation is calming down a bit and that this gives you an opportunity for reflection and the implementation of such projects?

Yes, but not to give way to reason. People are always tired and unhappy, and that’s why this falls from time to time. But the claims are still there. Nothing has really changed.

Has the mindset of the people changed too?

Phone calls I receive make me believe that in regions want to be informed of this program, and I feel a strong enthusiasm. From next week we will start to introduce our program in regions. Our goal is to make Tunisia a country of the 21st century and try to catch up with developed countries.

What are the future projections of your party?

They involve mainly achieving a growth rate averaging 7 % and an unemployment rate of 11 % instead of 16% in 5 years. These are the two key figures of our program.

And what about debt?

We will be forced to finance the proposed projects at 35% to 40%. The rest will be financed by an external contribution. However, the problem in Tunisia is not to raise funds, but to have projects that are clear and realistic based on a scientific diagnosis. We must have regions capable of implementing projects that are dedicated to them.

Donors exist and are looking to invest their money but in projects that hold up and with credible people. And if we want Tunisia to be successful, we need to establish security, visibility, legitimacy, stability, credibility and integrity.

To summarize, our motto in Nidaa Tounes is that prerequisites are needed for our program to be successful. There must be democratic and transparent elections, and a legitimacy that cannot be seriously contested.

What do you think of the draft Finance Act 2014?

It must be said that the budget is not a fund in itself. It is a tool among others in the hands of the government to implement its economic and social program. However, the government has no program. However, it has expenses and revenues, and must exert an effort to have a consistency between the two. It can not close the loop, so it turns to the middle class in order to retrieve the money it lacks.

Whence will come the 4 % growth? It is very difficult to reach this figure. In so doing, the growth rate does not exceed 2.5%. But I remain optimistic for the future. I am categorical because we have skills that can build the country.

Are you satisfied with the role of the NCA and the government today?

You only have to look at the opinion polls. The big mistake is that the NCA was elected to draft a constitution but focused on things it has not been elected for and this is not good.

Tunisia: Serinus less impacted by protests than other oil companies