HomeFeatured NewsThe advantages our "dear" members will have, while the country gets into...
Featured News

The advantages our “dear” members will have, while the country gets into debt to pay them! 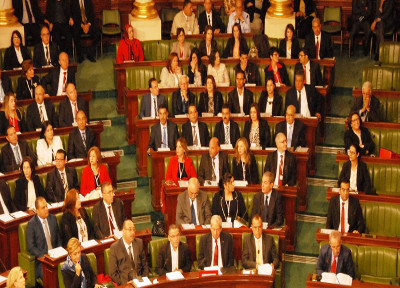 Despite alarming messages from economists and international financial institutions, like the International Monetary Fund (IMF), on the deterioration of the country’s economic indicators, members the House of People’s Representative (HPR) still ignore the realities if nothing was.

They pretend to be there to serve the interests of the people, but in reality they never lose sight of their own concerns.

They always run behind the material advantages, of all kinds, graciously offered by empty public coffers and taxpayers drained by tax breaks.

A work plan recently approved by the HPR Bureau will open the door to different interpretations, but the one that will supplant them all is that the people’s representatives want above all to serve themselves to the detriment of the best interests of the country.

The document shows, if need be, that our very “dear” deputies are tracking down all the ways and means to offer themselves a comfortable lifestyle of which the ordinary citizen has mourned since what is called the Revolution.

In a country that is struggling to emerge from an acute economic crisis that has been raging for several years, this issue must necessarily outrage citizens who are reeling…

The HPR Bureau recently approved the roadmap proposed by Ghazi Chaouachi, deputy speaker of Parliament for the affairs of MPs.

This is a mechanism that will give MPs new benefits. It contains 20 measures that should be put in place soon.

This is what was stated in a press article published on Thursday, February 23, 2017 in the Arabic-language newspaper “Achourouk”.

That roadmap stipulates the creation of a parliamentary academy with the aim of providing training sessions for members and advisers; another measure will allow MPs to seek treatment at the military hospital through an agreement with the Department of National Defence…

It was also recommended to coordinate with the services of the Ministry of Foreign Affairs in order to allow the spouses and children of MPs to benefit from a diplomatic passport, as is already the case for ministers.

The document also includes the signing of an agreement with Tunisair which will allow deputies, especially those abroad, reductions and facilitations on air tickets.

In addition, there are agreements with banks, leasing companies, telecommunications companies, travel agencies, hotels, etc.). With this text, MPs will be able to benefit from reductions and facilitations of payment.

A computerized system dedicated to the missions of elected representatives abroad was also included in this note, with the aim of guaranteeing better responsiveness, facilitating administrative procedures and reducing waiting times in the performance of tasks allotted to it.

A letter should also be sent to the Prime Minister, all central and regional government departments and agencies to facilitate the work of MPs and their welcome in all administrations.

Another letter should be sent to the departments of the Ministry of Social Affairs to conclude an agreement with the aim of giving deputies an identifier at the CNAM so that the parliament’s physician can sign an agreement on reimbursement of medical expenses for MPs, in addition to the possibility of setting up a mutual insurance company.

It should be recalled in this connection that an agreement has already been reached with the Department of National Defense to allow MPs to seek medical treatment at the military hospital.

A final agreement should be signed in the coming days. It should also be pointed out that a sports hall would be open in the annex to the HPR, in order to allow members of Parliament to sculpt a dream body and to relax, particularly after the end of the stormy sessions where even the show of insults and punches are not spared…