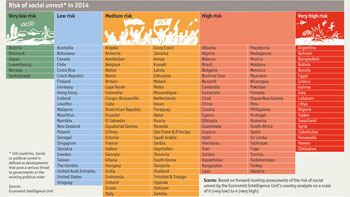 Tunisia was ranked among high-risk countries in terms of social unrest in 2014 by the Economic Intelligence Unit of “The Economist.”

It is ranked so, alongside, Morocco, Ukraine, Bulgaria, Brazil, Argentina, Mexico, Egypt and Turkey, where protests erupted over the last twelve months.

According to Laza Kekic from the Economist Intelligence Unit (EIU), economic distress is almost a prerequisite for protest, but does not explain outbursts entirely.

“Declines in income and high unemployment are not always followed by unrest. Only when economic trouble is accompanied by other elements of vulnerability is there a high risk of instability.

Such factors include wide income-inequality, poor government, low levels of social provision, ethnic tensions and a history of unrest. Of particular importance in sparking unrest in recent times appears to have been an erosion of trust in governments and institutions: a crisis of democracy.”

Compared with five years ago, 19 more countries are now in the high-risk categories. The Middle East and North Africa, southern Europe and the Balkans will be particularly vulnerable.

Civil society at JPA invite EU to clean up acts on...