The “super” minister daydreaming in a government threatened by K. Saïed! 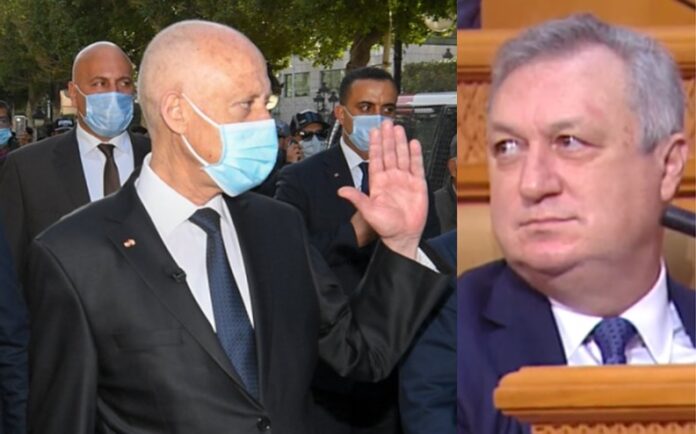 After less than six months, the Mechichi government finally woke up to the financial emergency for its mandate.

As a result, four bills on bilateral loans that had been sleeping in drawers for more than two years were reheated and urgently sent back to the ARP.

And it is in a tense atmosphere of complete cacophony, where PDL deputies of Abir Moussi tried by all means (including trying to do again what another deputy did to her) to stop the plenary the Parliament hastened, on Tuesday, February 2, 2021, to pass 3 bills for credits, under the title of capacity building of the economy, the banking sector and the public sector.

These are three loans, for a total amount of some €400 million, at rates ranging between 0.9 and 1% and repayable over a period of 30 years.

This, at a time when the head of state was putting the brakes on all the activity of the Mechichi government, to which he refused the latest reshuffle, and is joining forces with the UGTT to bring the whole country into a new constitutional crisis. This could very well handicap the Prime Minister who would like to negotiate a new loan agreement with the IMF and a new guarantee agreement with the United States.

There is a prospect of a new phase of governmental instability, which could send all this back to the Greek calends.

Did the “super-minister” know what he was talking about?

A vote, where even the “super-minister” of Economy was heckled and preferred to leave the room without talking about the bill.

And it is in an economic and financial atmosphere that is just as tense and impossible to gauge due to the lack of up-to-date information from a Finance Ministry that only publishes obsolete financial data, that the Super-Minister of Economy is about to embark on a long and painful process of international indebtedness.

The “super-minister” would like to borrow more than 3 billion USD on the international financial markets and intends to use a US guarantee to indebt Tunisia.

But can he, and can Tunisia’s financial and economic situation afford it? And to wonder even if this “super-minister” had read the latest IMF press release and the preconditions that he set, even indirectly, to start a new agreement with Tunisia? One also wonders if the “super-minister” was living well in Tunisia and had his feet firmly on the ground? And one would even wonder whether this “super-minister” knew what he was talking about when he announced his intention to raise 3 billion USD on international markets, or when he mentioned the search for a new US guarantee?

The UGTT, the first to put obstacles in the way of the “super” minister

“We reiterate our refusal to divest state companies  and our commitment to save them by reviewing their governance, reforming their management, supporting their financing, paying off their debts to the State, and offering all the conditions of efficiency, competition and leadership.

The negotiations are accompanied by social and economic measures to reduce the burdens on Tunisian women and men, whether related to prices, taxation, public facilities or social services in terms of education, health and transport”.

Is it with “an estimated deficit of 11.5 per cent of gross domestic product last year and a public debt of 90 per cent of GDP”, and this scathing response from the main trade union, that the “super” minister expects to have the means to carry out the reforms he says he will, to reduce the wage bill and high subsidy and to restructure poorly performing state enterprises?

The answer is in this statement by a former minister who knows a lot about this long process of negotiations with donors, and the IMF in particular.

This key is in the IMF’s hands and the IMF will not give it up, nor will it give its green light, until the government has a macroeconomic program that is sound, robust and convincing and that addresses hydrocarbon subsidy reforms and the civil service in addition to budget-intensive public enterprises.

But today we are far from that,” comments former Minister for Reforms and key IMF negotiator Taoufik Rajhi to Africanmanager.

Regarding the U.S. guarantee, he also tells us that “it is an eminently political decision, which is the work of Tunisian diplomacy, in this case the Minister of Foreign Affairs and our Embassy in Washington.

He also recalled that “the Trump administration was against this tool and has not granted any guarantee in the last five years, not even to Jordan and Israel, who had requested it”.

Regarding the link between the guarantee and the IMF, he said that “even if the guarantee is a political decision [Editor’s note: And we do not know what political counterpart could give Tunisia to the United States], the U.S. Treasury has its say, and it is categorical: the granting of the guarantee must be preceded by a green light from the IMF by an ongoing program or a successful review, otherwise it is opposed.

In his commentary on the statement of the “super” Tunisian Minister of Economy, Rajhi adds that “the economic objective of the U.S. Treasury in granting the guarantee is mainly to help the country to access the financial market and help it especially to free itself from its guarantee and rely on its own means of discussion”.

Taoufik Rajhi also explained that “the guarantee is not free, and costs between 30 and 35 million dollars, which are deducted from the aid granted by USAID to Tunisia, and this is why the Treasury is reluctant, because it prefers to grant direct aid rather than the guarantee of a credit”.

Tunisia: fall in industrial investment in 2012