HomeInterviewTunisia:The choice between separate or concurrent elections falls to the NCA, says...
Interview 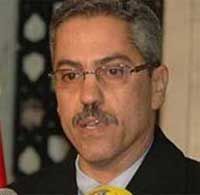 President of the elections committee “ISIE,” Chafik Sarsar seeks to mobilize the maximum number of voters while being convinced of the importance of renewed confidence among political actors and voters. The challenge is achievable in particular with the changes in Tunisia since the fall of Ben Ali.

During a press conference, Hamma Hammami accused you of serving the interests of the Ennahdha movement on the ground that you support concurrent presidential and legislative elections. What do you think?

Let me point out here that the ISIE declined throughout the first quarter of 2014 to express a preference or even an opinion on the issue of concurrency or separation between the presidential and legislative elections, despite the insistence of journalists and politicians, especially since the ISIE has not the prerogative to decide on that.

The decision to hold elections separately or concurrently falls to the National Constituent Assembly (NCA).

However, the ISIE issued a purely technical point of view in the National Dialogue on the constitutional requirements and the risks, advantages and disadvantages of each choice, and among other things, the additional cost that the national community should bear if decision is made to hold the two elections separately.

Consequently, this explanation should not be interpreted as being in favor of a political party. Because, in fact, the ISIE does not serve the interest of any political party and we are really on equal distance towards all parties.

As regards the financing of these elections, rumors circulate on the disposal of the EU and Switzerland to fund these political events. This has angered some political parties which have preferred a stronger contribution of the Tunisian government. What can you say about that?

The resources of the ISIE consist exclusively of annual funds coming from the state budget. And if international institutions provide a substantial financial support to the electoral process, everything must pass through the state. From this point of view, the ISIE is too watchful and jealous of its independence both financially and morally.

How much ISIE would be able to ensure the transparency of elections, knowing that there is strong insistence today on the review of appointments of delegates and governors, the majority of whom belonging to the Troika?

At this level, it will be noted that several factors combine to ensure transparent elections. Conditions have changed significantly since the fall of the dictatorship where delegates and governors were the only sources of influence on elections. The new regulatory and institutional framework makes that delegates and governors are not the authority in the organization and conduct of elections. It is the Independent High Authority which manages voter registration offices and polling stations according to standards, facilitations and guarantees set out by law.

On the other hand, we must not forget that today all political parties and the civil society can mobilize delegates, candidates and observers throughout the election process. This, plus the freedom of the press acquired after January 14, which allows today to disclose breaches in real time.

Do you think the turnout would be the same as in 2011?

It may be true that the context has changed since 2011. We are aware and we are organizing a campaign to encourage citizens to register and soon to vote. To do this, the ISIE has taken steps to involve the civil society, political parties and the media in this campaign.

Let me, at this level, give an optimistic view to mobilize the maximum number of voters while being convinced of the importance of renewed trust between politicians and voters.

What are the programs of the ISIE to encourage Tunisians to participate in the next elections?

Earlier this week, the ISIE will have important revelations in this regard. You are cordially invited to attend our press conference on Tuesday.

Some observers predict that it is difficult to hold the next election before the end of this year. What is your position?

The ISIE has a clear timetable and began to implement it despite the lack of visibility on the coincidence or separation of presidential and legislative elections. Politicians will decide on this issue. Meanwhile, we have already announced the start of voter registration which will be for June 23.

We have also begun the process of establishing regional offices. The ISIE is already mobilized to meet the deadlines in the Constitution and I hope that all parties concerned will do the same.