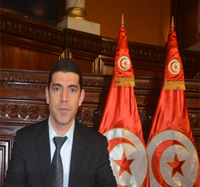 Programs implemented by the “Youth Without Borders” for the upcoming elections, monitoring of this process, the pioneering role of women in this process and the assessment of performance of the ISIE are the questions that Ahmed Allouche, vice president of the association has answered in an interview with Africanmanager.

Can you introduce your association?

The Association aims to promote the culture of dialogue, initiative spirit and values of volunteering and openness to others while participating in anchoring the values of citizenship and national identity among youth.

Other objectives include the promotion of democratic and transparent elections through awareness and training programs. In this context, we are working to increase youth awareness about the need to preserve public and private property.

Added to this is the organization of training programs, courses or activities to facilitate the integration of young people in civil society as well as monitoring their concerns and aspirations. There are also participation in various seminars and meetings at national, regional or international, to make known the Tunisian skills in all areas and finally, organizing conferences and publishing research and studies in various fields (youth engagement, health, environment, human rights, sports, education, intercultural dialogue, women, gender, development,…).

What was your contribution to the 2011 elections?

We have set up a program for the benefit of women leaders “Hia.”

What are your programs for the next elections?

Before we talk about our contribution to this important event, it is important to remember that we had participated in the drafting of the electoral law adopted later by members of the National Constituent Assembly (NCA).

As a reminder, we had proposed a draft law that benefited, before it reached the NCA, from the contribution of a set of experienced judges in electoral matters and independent experts like Judges Chafik Sarsar, president of the ISIE, Mourad Ben Moualla, member of the current and former ISIE or Rachida Ennaifer, Member of the Independent High Broadcasting Authority (HAICA).

In addition to developing this draft law, we have also established an important program “Hia” to promote the role of the women leaders in this process. Note that this is a regional program that is implemented in 6 countries: Jordan, Egypt, Lebanon, Iraq, Tunisia and Yemen.

In the case of Tunisia, the program led by our association, in coordination with five other associations, target the participation of women in public areas to ensure a gender balance in policies and practices.

Through this program, we are targeting 720 women in 13 governorates with a budget of 117,000 Euros allocated by the Swedish International Development Cooperation Agency (SIDA).

To this end, we started training courses related to the development of general policy as well training on the electoral process.

For the current month, training courses are scheduled in Sfax, Sousse, Bizerte and Tunis. 30 women are involved in this program and will subsequently participate in raising awareness on elections.

Have you thought about the monitoring component?

Certainly yes. We have set up another program by taking advantage of “Hia” program.

This will involve seven districts: Tunis I, Tunis II, Ariana, Manouba, Ben Arous, Bizerte, Sfax I and Sfax II. The number of women involved is of the order of 350 including 150 women who benefitted of the “Hia” program.

But, how will you ensure the success of elections at this juncture considered difficult?

As I said before, we have taken part in this process from the outset with our own election bill that was subsequently reviewed and amended at the NCA.

Furthermore, we were among the parties that urged the ISIE to extend the period of registration, and to ensure the participation of a larger number of citizens.

We will address the monitoring of the electoral process in order to reduce acts of fraud, vote-buying and even the intervention of some political parties or the ISIE. Our contribution will also be made on the day of voting.

How do you rate the performance of the ISIE, criticized recently by several political parties?

The “Youth Without Borders” considers that the ISIE is working within available means. Compared with the former ISIE, we can say that the performance of the current authority has shown some improvement especially with the use of “developed” technology.

Despite this, our association has reservations about the resignation of the executive director of the ISIE. Indeed, we would have preferred the application of the law to avoid any tension.

Anyway, we call on the ISIE to accomplish its mission, the one relating to the management of the electoral process in full transparency and neutrality.

Do you think we are capable of organizing elections before the end of this year?

It is mandatory for several reasons starting with respect for the Tunisian Constitution, adopted in February.

I take this opportunity to call on the government to meet its responsibilities. This responsibility also lies with the media, including HAICA which so far has not fulfilled its mission.