HomeFeatured NewsTunisia: will to defeat terrorism is not common lot of Deputies
Featured News

Tunisia: will to defeat terrorism is not common lot of Deputies 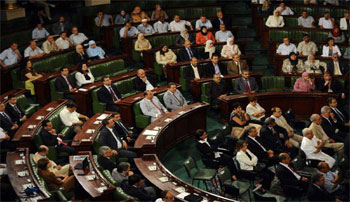 Tunisians have almost seen and heard everything during the discussion of the draft anti-terrorism law. First, the bill took a long time before being submitted to the National Constituent Assembly (NCA), despite its urgency, especially since because of the proliferation of the jihadist phenomenon after the revolution.

Indeed, the bill was presented to the Constituent Assembly only on January 28, 2014. It was referred to three commissions; General Law, Rights and Freedoms and Environment.

The delay in these three commissions to discuss its contents, the disagreements between members in these committees on the definition of terrorism and sending jihadists in intense areas of the world have questioned observers.

Repeated absence of MPs during plenary sessions and discussions dragging on over details ended by convincing the public opinion0 that members of the majority do not want this bill to pass.

But the latest conclusion in this regard, is the will of the majority to “downgrade” the anti-terrorism law, which was originally presented as an organic law, to convert it to an ordinary law. The argument was technical: facilitating the adoption of this law in view of the recurring absence of members who do not seem interested in the subject.

In fact, the ordinary law requires the presence of a relative majority in plenary and requires only this relative majority to approve it. This argument is therefore only the technical background, but the political dimension of this “downgrade” is very clear.

In truth, laws have their hierarchy, and the problems of jurisprudence that may arise in their application find their solution only in relation to the recognized hierarchy.

Giving the Terrorism Act an organic status is also sending a message to terrorists and those providing them support and cover that the community and state institutions will face them with the firmness needed to put an end to this phenomenon and also sending a message to the civil society, political actors, citizens and international public opinion that Tunisia does not compromise with terrorism.

But our members wanted to send a different message to all these and this was evident even in the speeches at the plenary devoted to the issue.

The revision of the old anti-terrorism law on “support to international efforts against terrorism and prevention money laundering” (Law 75/2003 of 10 December 2003) was a requirement and it was even a claim unanimously shared by all Tunisians.

Its shortcomings were evident. It did not guarantee suspects their rights and the defense the minimum requirements to perform its duty. The law required the lawyer to send the authorities “information relating to terrorist offenses of which he had knowledge” and criminalizes his commitment to the professional secret that binds him to his client.

In addition to these negative aspects, the 2003 law maintained a huge blur on the qualifications of terrorist crime and gave priority to the repressive and deterrent aspect at the expense of the preventive component, and adopted an extremely broad and vague definition of terrorism and incitement to terrorism.

These shortcomings and deficiencies were recognized by everyone. And the new law must ensure an effective fight against terrorism while respecting freedoms and the right of defense and the humane treatment of suspects. But instead of creating the unanimity of all public opinion and MPs, it turned into a subject of litigation and political infighting. This shows that the will to overcome terrorism is not shared between our MPs.

World Bank grants US$50 million to Rwanda for agricultural development