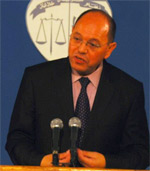 The 2013 budget deficit will be 5.3% against 6.6% in 2012, Slim Besbes, Acting Minister of Finance announced at a press briefing held Tuesday at the Government Palace in Kasbah,

He said that the novelty of this budget will be the adoption of the Islamic “Sukuk” (bonds) whose contribution will be 1 billion dinars.

In order to limit the use of foreign debt, the budget plans to rely on own resources up to 75%.

The budget will allocate 62% of expenditure to the social sector and 63% of development expenditure will go to the economic sector.

The focus will be in the year 2013 on the development of inland areas and the promotion of investment and job creation. The budget also plans to recruit 23,000 staff in the public service.

The Middle East, Africa has seen a significant rise in hotels...

Tunisia : «The share of Tunisian suppliers and equipment providers will...