Tunisia-2013 budget: Government goes back to drawing board 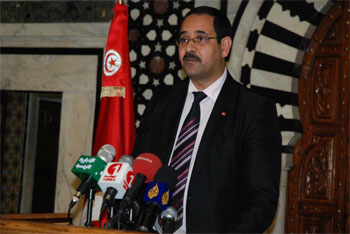 The draft law on investment funds was approved. This was announced on Thursday, May 2, 2013 at the Kasbah by Minister in charge of Economic Affairs, Ridha Saidi, after a Cabinet meeting held at the Government Palace.

This bill is part of the diversification of funding sources of development projects.

The meeting, which brought together the Ministers of Finance, Industry, Education, Tourism and Minister in charge of Economic and Social Affairs, focused on the economic and financial situation in the country.

Reviewing the forecasts of the 2013 State budget, Finance Minister Elyes Fakhfakh said the economic turmoil experienced by Tunisia will undoubtedly impact on the implementation of the budget. For this reason, efforts should be made to preserve deficit and debt rates.

Speaking of public investment, the minister emphasized the improvement in the management of development expenditures which totaled 147 MTD during the first quarter of 2013, against 77 million for the same period of 2012. The Finance Minister has given no explanation for this surprising increase!

About budgetary pressures, the Minister noted that the initial forecasts were revised in the light of three main data which are falling revenues of the Gafsa Phosphate Company and the Tunisian Chemical Group, after the decline of production in both companies, the development of subsidy expenditures which have reached 772 million dinars and the revision, by 200 MTD, of revenue from participation in the balance sheet of the Central Bank for the year 2012.

With regard to the restructuring of the turnover of public banks, the finance minister announced the allocation of an additional 400 MTD to be devoted to the recapitalization of state banks.

Elyes Fakhfakh, Minister of Finance said, on the other hand, that negotiations on Islamic bonds (Sukuk) are making progress, especially on the regulatory front. The law on this financial product is subject to a review in the National Constituent Assembly (NCA), noting that a technical committee will be established and will be responsible for this operation.

Elyes Fakhfakh also said efforts are stepped up to make Tunisia the first country to use Islamic financing by the end of the year.

For his part, Jamel Gamra, Minister of Tourism, said preparations are well underway for the tourist season. The Cabinet meeting focused on four main themes. They are environment promotion, guaranteeing security in the country, improving the quality of services and developing promotional campaigns.

On another level, the minister stressed the improvement in the rate of bookings in recent weeks. Indeed, considerable progress has been made at the Russian and French markets which have experienced a significant decline in the previous period.

With regard to promotion, interest is currently focused on intensifying operations targeting traditional markets (such as France), neighboring markets (Algeria) and promising markets (Turkey).