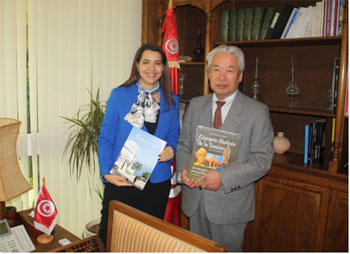 Tunisian tourism will have a new website in Japanese to promote the Tunisian destination in Japan and Asian countries.

It will, in a first step, be operational in April, to highlight the diversity of tourism in the north of the country and it will be completed in June 2014 with a comprehensive presentation on the tourism potential of southern Tunisia.

The approach is part of a project to promote tourism in Tunisia initiated by the Japan International Cooperation Agency (JICA).

In this regard, a delegation of experts from JICA was received Tuesday by Minister of Tourism Amel Karboul.

The meeting focused on the monitoring of the project and logistic conditions for its realization. The Minister reaffirmed the Tunisian government’s commitment to support this project especially as it is intended to promote a flagship product of the Tunisian tourist offer and promote the destination where tourism has experienced several difficulties in recent years.

The head of the Japanese delegation has also announced that the Japanese government has decided to allocate a grant of 50,000 dinars for the project to renovate the hotel school in Tozeur.

It should be recalled that the Ministry of Tourism and the Japan International Cooperation Agency (JICA) signed in October 2012 in Tunis an agreement on a project to promote tourism Saharan tourism in Tozeur and Kebili (southern Tunisia) with the main objective to attract more Japanese and Asian tourists to the country.

This project was initiated and funded by JICA for an investment of 5.4 million dinars and will last 3 years.

The project aims to help Tunisia develop a marketing and communication strategy in southern Tunisian regions to promote and publicize tourism products and natural resources in these areas.

It also involves setting up a cooperation mechanism based on public / private partnership for the implementation of action plans, strategies and concrete promotion activities.

A joint coordination committee, composed of representatives of tourism structures and JICA, was created in this context.

JICA experts also indicated that a second brochure on Tunisian tourism will be widely disseminated during the World JATA tourism fair which will be held in Japan in September 2014 and a seminar on Tunisia’s tourist and cultural facets.

In 2010, the number of Japanese visitors in Tunisia was around 14 thousand tourists.