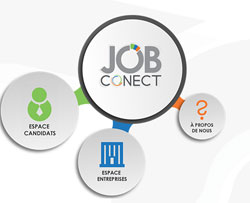 The first edition of the Job Fair “Job CONECT 2013” will be held next September 10 in Tunis, said Mr. Tarek Cherif, President of the Confederation of Tunisian Citizen Enterprises “CONECT.”

The fair, which will be attended by approximately 100 companies, will be a space of direct meetings between business managers and job seekers, Tarek Cherif said at a press briefing, adding that “one hundred recruitment operations will be made at this event.”

The objective is establish direct contacts between companies seeking expertise in different areas and job seekers, organize interviews and facilitate the employment of a large number of job applicants while meeting specific and unique business needs.

“Job CONECT” will be an annual meeting place between entrepreneurs wishing to strengthen their human potential and job applicants.

Tunisia: trade coverage down to 71.2%