HomeFeatured NewsTunisia: new system of traffic in port of Rades to be adopted...
Featured News

Tunisia: new system of traffic in port of Rades to be adopted from mid-October 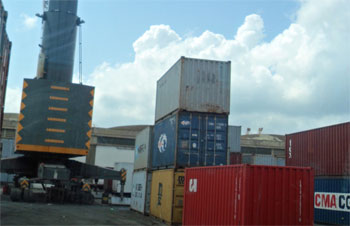 A new traffic system will be adopted from next mid-October at the port of Rades which is operated by the Tunisian Stevedoring and Handling Company (STAM), as the company is expected to launch reforms to improve performance, said Minister of Transport Abdelkarim Harouni.

Mr. Harouni , who was speaking Tuesday at the third meeting of the Monitoring Committee of the Situation of the Port of Rades, added that the committee gave its agreement in principle regarding the reform of STAM pending the relevant written proposals of business partners.*

The proposed reform of the company, which aims to improve performance, particularly provides for the adoption of a new classification of the company, the proposal of a new organizational structure and strengthening its financial resources through increasing rates of stevedoring and handling services in commercial ports.

The company has pledged under this program to work 24 hours a day throughout the week to find solutions to its debt with partners and initiate investigations on transactions, markets, shopping and spare parts files in addition to the review of recruitment and promotions made during the last 5 years.

The third meeting of the Monitoring Committee of the Situation of the Port of Rades was held to discuss the development strategy of the port of Rades.

This strategy requires the demolition of some old warehouses, the efficient allocation of truck traffic and stevedoring and handling equipment and renewal of some docks which handles 90% of trade in Tunisia.

Mr. Harouni said it was agreed to establish a port security strategy against the risk of «terrorism and smuggling” by accelerating the installation of surveillance cameras and lighting and reactivation of joint patrols while providing them with the necessary equipment.

According to the minister, the national security committee of the Tunisian ports should meet soon to update the strategy for the protection of these structures due to the increased risk in this area and to ensure security and combat smuggling.