Tunisia-Corruption: Customs, political parties and police in the lead 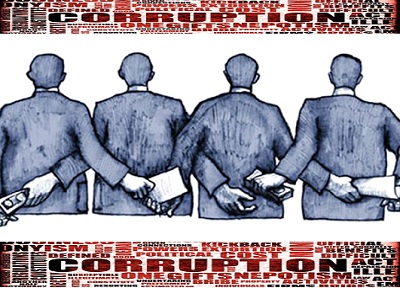 Corruption is the favorite subject of all Tunisians since the so-called revolution. Everyone is talking about it, citizens, politicians, government officials, NGOs and all the bodies that are now dedicated to it, in accordance with the saying “those who speak (of it) the most, do the least.

All denounce it, but without naming anyone and without any tangible proof and for 6 years without result. On the contrary, 78% of Tunisians surveyed by Sigma Conseils say that it has increased significantly after the so-called revolution.

According to the results of an opinion poll presented at the Sigma Open 2017, customs agents would rank first. . 63% of respondents say this, but it may be only perception. What is certain is that the temptations that this institution encounters are very great and that this perception is certainly not generalized.

In the second position and this is more dangerous came the political parties, the very foundation of democracy that cannot be one without the existence of these formations. But among the parties, it is above all the financial non-transparency of these political structures that makes it a target of choice.

Few parties in fact publish their financial statements and communicate on the origin of their money.

This is not to mention the silence prevailing on the participation of certain businessmen, more or less shady, in the election campaigns of a number of these parties.

In the 3rd position comes the entire security sector; the survey has made no difference between the components of this sector, which are the police, the National Guard and the armed forces.

This sector is subject to temptations, although it is good to say that there would be no corrupt without corrupter and that general culture would almost glorify the resourceful who manage to get by, even if it means giving “a bribe” to the official.

And here is the importance of the other 24% of respondents who think that the first incitement to corruption comes from the lack of control. It is true that for customs, as for security forces, a simple monitoring of the standard of living of the agents would suffice to stem the corruption.

⦁ Tunisia among “The Good”

And yet Tunisia’s recent ranking by Transparency International shows first that things are improving. The latest Transparency report even ranks Tunisia under the heading “The Good” throughout the region of the Middle East and North Africa.

“Tunisia is one of the very few countries that slightly improved on the index. The country took some serious anti-corruption steps last year such as passing the Access to Information law, one of the most progressive laws in the region, and adopting a national anti-corruption strategy.

In addition, the Anti-Corruption Agency has been empowered to do its job, and there is a good space for civil society to play a role in accountability. The parliament also adopted a Financial Court law, which allows the court to investigate Grand Corruption cases.

Yet Tunisia has still a long road ahead in its fight against corruption. Laws on whistleblower protection, conflict of interests and illicit enrichment policies remain missing. The Tunisian judicial

system should also move forward in pending corruption cases, especially those that are ongoing since the revolution six years ago.

In addition, there has been a temptation to centralize information since 2015 in all ministries.

⦁There is no more corruption in Tunisia

Looking at the results of the Corruption Index for Tunisia between 2010 and 2016, it is clear that this has neither increased, as complained about in Tunisia, nor decreased.

Tunisia had a score of 43 in 2010, 41 in 2016. Between the two years, the number of countries monitored has decreased, hence the improvement of the score and even the Ranking.

It is also important to note that there is no more corruption in Tunisia than elsewhere, even in comparison with some European countries. Indeed, if the ranking of Tunisia was 75 in 2016, it was worse in Algeria, which is 108th with a score of 34, or Morocco, which is ranked 90th with a score of 37.

This knowing that less the rank is important, the better the perception is. Turkey, which is the example for the 2nd ruling party in Tunisia (Ennahdha), is in the same rank and has the same score as Tunisia. Egypt, country of the “Bakchich” (bribe), has only a score of 34 and a Ranking of 108.

It is also true that what has increased the perception of corruption is this local perception, built on a continuous self-flagellation since 2011 and the multiplication of channels, NGOs and official bodies, which speak only of this and which each time hit the headlines with “revelations”, without any tangible proof and sometimes even without any judicial follow-up.