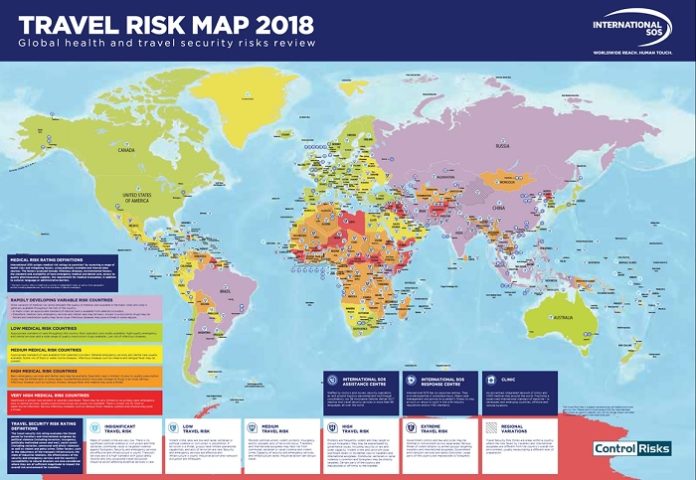 Tunisia is listed as a very high risk country for road safety and medium risk for medical safety and passenger safety.

With regard to Algiers, capital of Algeria, the risk is considered high for the three components.

Cairo, the capital of Egypt, received medium risk ratings in the areas of medical safety and travel security (although the western part of Egypt and northern Sinai received were considered at high risk).

The risk of road safety in the country is described as moderate, slightly better than in Morocco where, like Tunisia, this risk is very high.

In Libya, where two rival governments are fighting to control the war-torn country, scores are low for all three areas.

Both medical and road safety risks are considered very high and the risk of travel safety is extreme.

Finland, Norway and Iceland received the highest scores. All three received the low risk rating for all three areas, according to the map.

The countries posing the greatest risk in road safety are Saudi Arabia, Iran, Kazakhstan and Bolivia.

European countries, as well as New Zealand, Japan and Australia, received a low or very low risk score in this category.

Mexico, Pakistan and parts of India are all ranked among the best in this category.

Canada, the United States, much of Europe, Australia, Japan, and New Zealand are all considered low risk in the medical category.