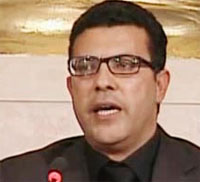 In his reading of the political imbroglio, Mongi Rahoui, academic and member of the Unified Democratic Patriotic Party emphasizes the urgency of the current situation, inviting political parties to engage in a national dialogue to end the political stalemate.

How do you see the current situation facing the country?

This is clearly a crisis in all directions and dimensions (economic, social and especially political). We are in a political crisis which is very acute where there is a widespread interruption of dialogue between opposition parties and the ruling Troika.

There is an unprecedented tightness between the ruling parties and the emergence of an unprecedented opportunism on the part of CPR which is an attachment to power for the sake of political expediency rather than love for Tunisia. More, Islamist party “Ennahdha” is sticking to power, and especially to sovereign ministries, including the Ministry of the Interior and of Justice.

Currently, we are in a crisis situation where there are three ways. There is the initiative of Hamadi Jebali to form a mini government of technocrats. In this context, there has been strong support from several parties. We have also the position of Ennahdha and its allies and the other position is that of the Popular Front and its allies.

The trend is driven by the tension that exists between the various parties and the ruling party which does not want to admit that it is responsible for the crisis.

It would have better thought of the initiative taken by the UGTT to achieve a national dialogue.

Beyond the challenge of an apolitical government, the political landscape has been recently marked by the creation of a council of elders. That council has been strongly criticized. What is your reaction?

Yes, this is true because this council is distinguished by its Islamist-Destourian composition. It should be noted that the Popular Front is not represented, and this is a committee that will give legitimacy to the initiative of Hamadi Jebali.

We, therefore, advocate a national conference involving all parties for a national consensus and a roadmap that will unite all Tunisians.

What is the impact of this crisis on the national economy?

Of course, the challenges are huge, while the situation worsens from one day to another. We know very well that there is a dramatic increase in prices especially of food commodities. Added to this is the deterioration of the purchasing power of citizens and an inflation rate which rose from 3.5% to 6%. So there is a real worsening of the current situation. So, it is not clear that tensions will subside. Instead, they will worsen still more.

How to act then?

Solutions are certainly part of the proposal made by the Popular Front. Today, we need a government of crisis with necessary experts who will undertake to implement a restricted and reduced program, consistent with what remains of the transitional period which ranges between 6 and 10 months. So we need a program that would fit this period.

If the initiative of Hamadi Jebali fails, how you view the political landscape?

The crisis will become more acute and tensions will be more vivid. This will lead to chaos, as Ennahdha and CPR will be rejected by the opposition as well as by the people.

What’s new about the assassination of political opponent Chokri Belaid, especially as there will be a resort to the International Criminal Court?

We can not comment on the course of the investigation. For the appeal to the International Criminal Court, it is a good alternative that will be implemented.

Tunisia to borrow from international financial market in 2013